A deckchair and umbrella rental operator (right) whose staff were accused of chasing away tourists for setting up their own mats tries to explain her side of the story to officials at Jomtien beach on Saturday. (Photo by Chaiyot Pupattanapong)

PATTAYA: Pattaya authorities on Saturday began to reclaim footpaths on Jomtien Beach from encroching vendors and took action against a deckchair rental operator for intimidating tourists.

Inspectors descended on the Jomtien Beach road between sois 2 and 5 following complaints from residents and tourists that many beachfront stalls were blocking walkways, forcing people to walk on the road. The vendors were warned to remove their goods from the footpaths.

Setthapol Boonsawat, chairman of the Pattaya municipality legal team, said footpaths along the beach must be reclaimed for the benefit of residents and tourists and the municipality would not let individuals occupy public spaces for their own benefit.

Municipal officials also suspended the permit of a deckchair and umbrella rental operator on Jomtien beach for 15 days for allegedly intimidating tourists.

Visitors to the beach had complained that the woman's staff had chased them away after they set up their own mats in front of the row of deckchairs for rent.

Mr Setthapol said such conduct had affected the tourism reputation of the popular beach resort city and action must be taken against the operator. If there was a recurrence of such an incident, the municipality would suspend her permit for two months or revoke it, he warned.

The operator told officials she was not at her site at the time as she had to take her husband to see a doctor, leaving only her immigrant workers in charge.

She blamed the incident on communication problems. She said her workers had no intention to expel tourists. They just warned the tourists about dust that might contaminate food if put on the mats, she explained.

Many beaches are now free of encroaching vendors and some other abuses have been curbed, but authorities remain vigilant for attempts by violators to resume their activities. 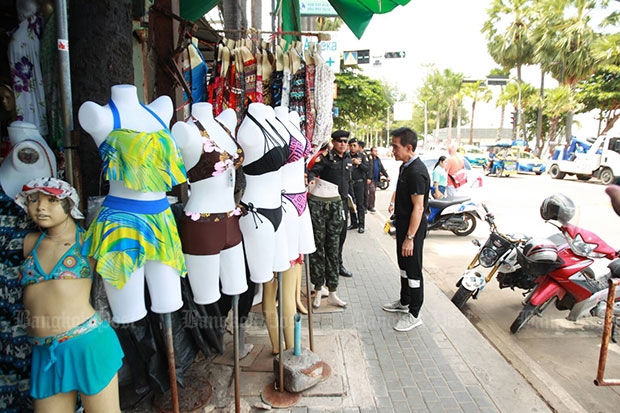 Some vending stalls near Jomtien beach have been blocking footpaths, prompting authorities to launch an operation to reclaim walkways. (Photo by Chaiyot Pupattanapong) 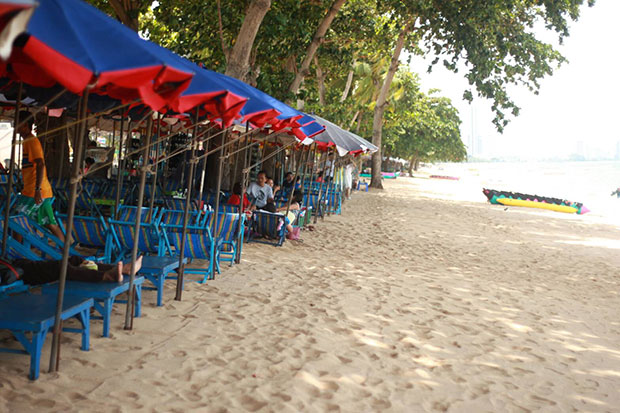 Deckchairs and umbrellas lie along Jomtien beach in Pattaya. (Photo by Chaiyot Pupattanapong)