NAKHON SI THAMMARAT - The dead body of the director of the Phangnga probation office, who was reported missing 11 days ago, was found stuffed in a plastic container dumped in a canal in Pak Phanang district on Wednesday.

They found the container  and the body of Chawee Intara after  searching for about an hour, according to Nakhon Si Thammarat police chief Pol Maj Wanchai Ekpornpit, who led the search team.

Chawee, 57, senior justice official and also director of the probation office in Phangnga, was inside a 200-litre plastic barrel half-filled with cement.

Veeradet Paedam, 23, and Sitthipong Buppakhorn, 22, were arrested in Nakhon Si Thammarat on Tuesday and confessed they had dumped Chawee's dead body in Khlong Bang Chak, according to police.

Police handling the case said Chawee had developed a Facebook relationship with a woman identified later as Natthanan Indam, 25. The woman already had a boyfriend, Adisak Thongsomja, 30

Mr Adisak learned of their relationship and became angry. He demanded his girlfriend arrange to meet Chawee at a house in Chain Yai district in Nakhon Si Thammarat.

When Chawee arrived Mr Adisak and four friends beat him to death. They stuffed his body in the barrel and poured cement into it. The container was taken away on a pickup truck and dumped in the canal, investigators said.

Mr Adisak, Ms Natthanan and the other suspects remained at large.

Mr Chawee was last seen on Aug 20 driving a Toyota Vigo double-cab pickup truck. His relatives filed a complaint with police, asking they help find him.

The Justice Ministry sent a team from the Department of Special Investigation to assist the investigation into the Phangnga probation chief’s disappearance. 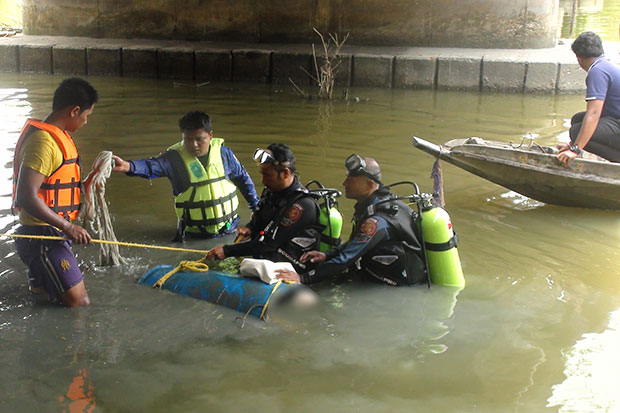 Divers use a cord to secure the container containing the body of Chawee Intara as they pull it from a canal in Nakhon Si Thammarat.  (Photo by Nujaree Raekrun) 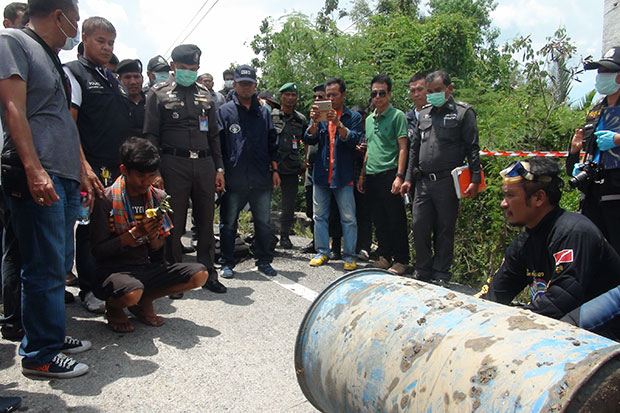 Police and rescue workers view the barrel and the body of the missing Phangnga chief probation officer held inside it with cement. (Photo by Nujaree Raekrun)