Suspect Apai Ruengvorn, 28, is taken for a crime re-enactment at the base of a cliff at Ao Nang in Krabi where an American woman was badly hurt in a fall while fleeing her attacker. (Photo by Achadtaya Chuenniran)

KRABI: A badly injured American woman was trapped overnight after a 45-metre fall from a cliff when she tried to escape a man accused of trying to molest her.

The 23-year-old woman endured a night of pain, trapped between rocks near the sea with a suspected broken back, before rescuers found her on Friday morning, according to local reports.

Police say the woman's attacker tried to molest her twice, once at the top of the cliff and again after she had tumbled down onto the rocks below. The second time, she bit his ear and he fled. He then called 191 to alert authorities that a tourist needed to be rescued. 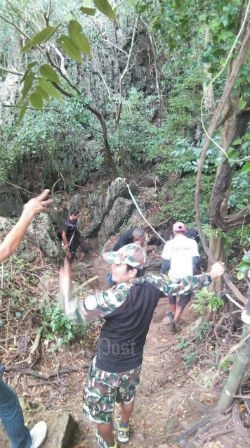 Investigators examine the area near where the American woman fell at Ao Railay in Krabi on Saturday. (Photo by Achadtaya Chuenniran)

Apai Ruengvorn, 28, of Wang Wiset district in Trang, was arrested on Friday and taken on Saturday for a crime re-enactment at the site near the popular tourist area of Ao Railay.

The suspect, a hired hand at Ao Railay, had met the tourist at the bay on Thursday night and offered to accompany her to her accommodation at nearby Ao Ton Sai. To get to there, they had to walk along a ridge about 50 metres above the sea.

The suspect admitted that he became aroused and tried to molest the woman, who fled and fell about 45 metres, said Pol Lt Songpol Bunchai, a duty officer at the Ao Nang police station.

The suspect went down to the bottom of the cliff and found that the woman could not move. He tried to molest her again but she resisted and bit his ear. He then left the scene and called the 191 police hotline.

Nitipong Mongkolpradit, director of the tourist help centre in Krabi, said staff there were alerted at 11pm on Thursday. They notified officials of Hat Nopparat Thara-Mu Koh Phi Phi National Park and asked for help to find the woman. The rescuers were unable to find her that night and the search continued on Friday morning. When rescuers found the woman, she said she had no feeling in her legs.

The woman was taken to a clinic in tambon Ao Nang before being transferred to Krabi Hospital. Doctors there said she had a broken lower back and nerve damage requiring urgent surgery. They transferred her to Bangkok Hospital Phuket where surgery was performed on Friday night.

Doctors reportedly said the surgery went well but the woman still reported numbness in her legs.

Authorities notified the US Embassy, which contacted the hospital and arranged for the victim to be transferred to Bumrungrad Hospital in Bangkok. Her current condition is not known.