The back half of the last carriage on the Sungai Kolok-Bangkok train was blown off by the bomb blast in Khok Pho district of Pattani on Saturday evening. (Photo by Abdulloh Benjakat)

PATTANI: One man was killed and three people injured when a bomb exploded on the tracks in front of a railway station in this troubled southern province on Saturday evening, damaging a Sungai Kolok-Bangkok train.

Pol Capt Pramot said the bomb was placed on the tracks and exploded when the train passed over it as it passed the station.

The force of the explosion blew away half of the last carriage and killed Chawalit Khongpan, a railway employee who was sitting in the carriage at the time.

Amnuay Mapae, 49, the train station chief, was injured and was taken to Khok Pho Hospital, according to the INN News Agency. Also injured were Ekkabolloh Bilkodem, 47, a defence volunteer on the train, and Ms Supit Suwanmanee, 54, a train service employee. Their conditions were not known.

The train was on its way from the southern border town of Sungai Kolok to Hat Yai in Songkhla at the time of the blast.

Police believe the blast was linked to the southern insurgency that has claimed 6,500 lives and injured thousands more over the past 12 years. 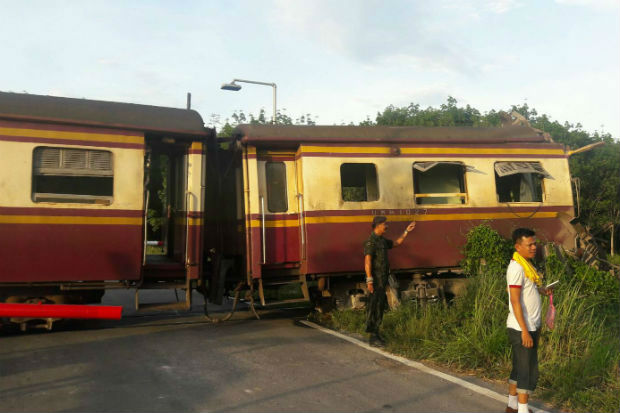 Railway officials inspect the damage to cars on the Sungai Kolok-Bangkok train following a bomb blast in Khok Pho district of Pattani on Saturday evening. (Photo by Abdulloh Benjakat)
Do you like the content of this article?
COMMENT (6)
MOST RECENT
World

BEIJING: Millions of people were confined to their homes in China Monday as the country tried to contain its largest coronavirus outbreak in months with mass testing and travel curbs.

TOKYO - Hurdler Jasmine Camacho-Quinn claimed Puerto Rico's first Olympics athletics gold on Monday but Belarusian sprinter Kristina Timanovskaya was absent from the women's 200m after claiming her country had forced her to leave the Games.