Drones will be used to patrol railway tracks in the far South after <a href="http://www.bangkokpost.com/news/security/1077609/bomb-blast-at-pattani-train-station" target="_blank">Saturday's bombing in Pattani</a>, Deputy Prime Minister Prawit Wongsuwon said on Monday.

The unmanned aerial vehicles (UAVs) would be deployed while soldiers, police and railway staff would work together more closely to ensure safety of train services between Hat Yai and Sungai Kolok train stations, said Gen Prawit, who is also the defence minister.

He also said that the bomb, which damaged a local southern train from Sungai Kolok to Hat Yai in Khok Pho district, Pattani, on Saturday, had been buried long ago but was detonated on Saturday.

Despite the incident, Gen Prawit confirmed the government would withdraw soldiers of other regions from the far South next month as planned. However, the removal would be gradual and the forces would be replaced.

The railway track bombing in Khok Pho district killed a railway employee and injured another colleague and two passengers.

The suspension is having serious impacts on such commuters as students and vendors in the region.

SRT governor Wuthichart Kalyanamitra said SRT engineers had already been at the blast site to pave the way for the repairs which should take 5-10 days.

SRT deputy governor Tanongsak Pongprasert said the repair could be done only between 8am and 4pm for safety reasons.

On July 3, a bomb severely damaged a rail track between Rueso station in Narathiwat and Balo station in Yala. 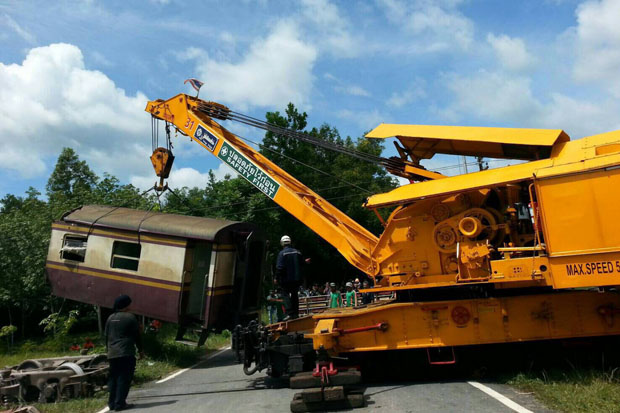 Staff of the State Railway of Thailand move the bomb-damaged carriage to pave the way for the repair of blast rails in Khok Pho district, Pattani, on Monday. (SRT photo)