A school bag lies on a street at the scene of a bombing outside a primary school in Tak Bai district Narathiwat on Tuesday, that killed a man and his 5-year-old daughter and wounded 8 other people. (Reuters photo)

A bomb explosion took the lives of a man and his 5-year-old daughter as they arrived at her school, and wounded eight other people, in Tak Bai district, Narathiwat, on Tuesday morning.

In Pattani, a bomb concealed at a resting place used by security teams exploded, wounding a volunteer ranger on teacher proection duty.

Security authorities said the Narathiwat bomb was detonated about 8.25am when parents were delivering their children to Ban Taba School in Ban Taba village of tambon Jeh Hay, Tak Bai. 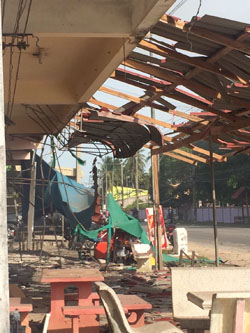 The explosion occured outside this shop, opposite a primary school, in Tak Bai on Tuesday morning. (Isoc photo)

A 23-year-old vendor later succumbed to his wounds at a local hosptial. He was identified as Talmeesee Mada-o.

Col Pramote Phrom-in, spokesman of the southern branch of the Internal Security Operations Command, condemned the attack outside the school as inhumane.

He also criticised non-government organisations he said were accusing the government of violating suspects' rights, but not taking any stand to protect the victims of the violence.

Authorities in Narathiwat said later the bomb weighed about 20 kilogrammes and was  inside a small gas cylinder placed on a motorcycle parked in front of a shop opposite the primary school. The motorcycle was stolen when the owner was murdered in Tak Bai on June 19.

It was parked in front of a shop and the bomb covered with a crash helmet.

When it went off the area was busy, with parents bringing their children to the school

Cdr Krisana Yuansa-ard, commander of the 31st special unit in Narathiwat, blamed an insurgent group led by Romli Jehyi for the attack.

Security officials had monitored its movements but never expected it would attack the school while pupils were arriving there. (continues below) 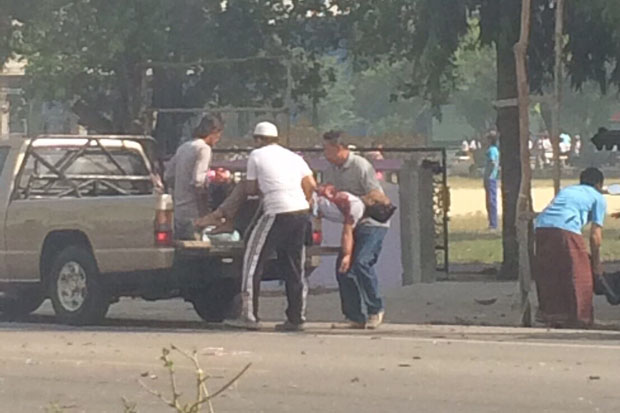 An injured policeman is placed on board a rescue vehicle before being rushed to hospital after the bomb explosion outside a school in Tak Bai district, Narathiwat. (Isoc photo)

In Pattani, a ranger volunteer providing protection for teachers was wounded by a bomb explosion at a roadside shelter in Panare district on Tuesday morning.

The shelter, on the edge of a field beside the road in tambon Nam Bor, is often used as a rest stop by security teams.

The bomb went off about 10.10am when a teacher escort team arrived there, police said.