Former leaders of the yellow-shirt People's Alliance for Democracy (PAD) have insisted their supporters will carry on the spirit of sacrifice of its former key movement leader and founder Sondhi Limthongkul following a Supreme Court ruling against him.

The Supreme (Dika) Court on Tuesday upheld rulings from the primary and appeal courts which handed 20-year jail sentences against Sondhi, founder of Manager Media Group (MMG), and two former Manager directors for violations of the Securities and Exchange Act. 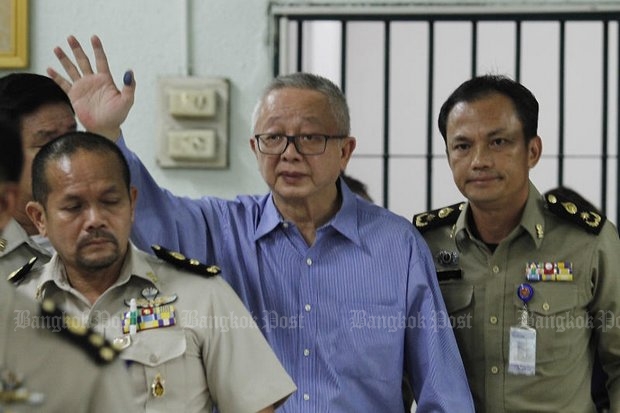 Sondhi was scarcely given time to say good-bye before justice officials whisked him out of the Supreme Court and into a prison van. (Photo by Pornprom Satrabhaya)

Parnthep Pourpongpan, a former PAD co-leader and now a personal adviser to Sondhi, told the Bangkok Post that the PAD's ideals and spirit of fighting for justice will remain intact despite the fate of Sondhi. PAD supporters have been proud of Sondhi as a role model in fighting for justice, he said.

Mr Parnthep said Sondhi has shown he has followed court proceedings and respected the courts' rulings. Sondhi appeared at all the hearings from the primary court to the Supreme Court, and never fled justice, Mr Parnthep said.

"Previously, Mr Sondhi quit as the PAD leader, and today he has lost his freedom. But the movement's ideals and spirit of sacrifice for the country will remain. We always respect the judicial process," he said.

Mr Parnthep said Sondhi provided "a guiding light" for the public when he led the PAD movement which mobilised tens of thousands of protesters against then prime minister Thaksin Shinawatra in mid-2006. His actions remain etched in the public's memory, he said.

Suriyasai Katasila, a former PAD coordinator and now director of the Thai Reform Institute, told the Bangkok Post that Sondhi had made substantial contributions towards public movements fighting for democracy.

Mr Suriyasai said that even though Sondhi has now been sent to jail in a case involving personal business transactions, the sacrifices he made as PAD leader have remained a beacon of hope for the movement's supporters.

"Today, some of the movement's supporters have become members of the PDRC [People's Democratic Reform Committee], and others have split to pursue other causes. But I believe when the right time comes, the alliance's supporters will regroup and carry on the ideals and work for the sake of the country," Mr Suriyasai said.

The Supreme Court upheld the 20-year prison sentences for all three defendants.

Named in the lawsuit filed by the prosecution in October 2000 in the Criminal Court on behalf of the Securities and Exchange Commission (SEC) were Sondhi and three former Manager directors -- Suradet Mukyangkoon, Saowalak Thiranujanyong and Yupin Chantana.

They were accused of falsifying documents used as collateral for a 1.078-billion-baht loan from Krungthai Bank, without seeking approval from the board of directors.

The loan was arranged for The M Group, a private company controlled by Sondhi and a major shareholder in MMG.

MMG was listed as a guarantor for the loan with Sondhi, Saowalak, Yupin and Suradet signing the guarantee document.

The SEC said the board of MMG was unaware of the transaction, which was also not disclosed in the listed company's financial statements.

The M Group later defaulted on the loan, resulting in MMG becoming liable. MMG was later forced to enter a debt-rehabilitation scheme after being unable to repay the loan. (Story continues below) 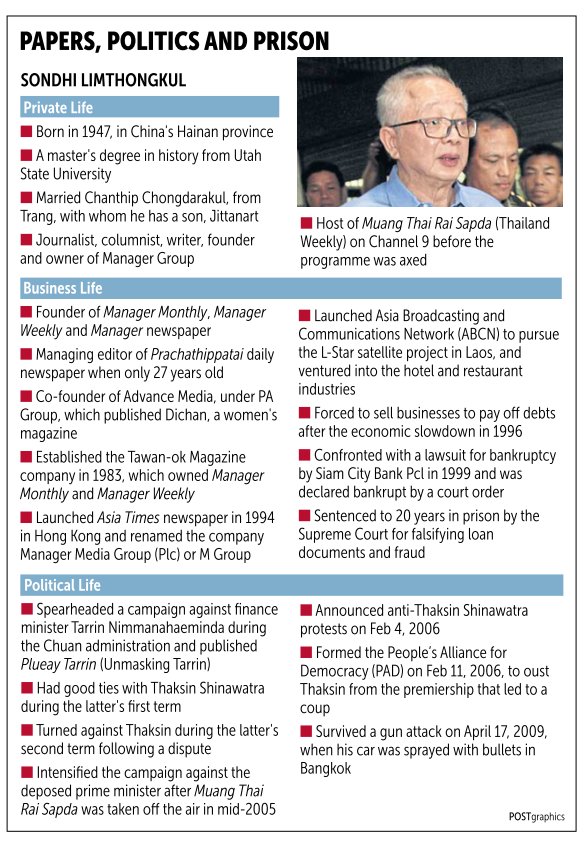 The Criminal Court, on Feb 28, 2012, found them guilty and sentenced Sondhi and Saowalak to a total of 85 years in prison, Yupin to 65 years in jail and Suradet to five years.

Since the law limits maximum prison terms to 20 years, the court ordered Sondhi, Saowalak and Yupin to each serve 20 years in jail.

The three of them appealed for lighter sentences as well as suspended jail terms. Suradet chose to serve the two years and six months.

The trio once again appealed in the hope that they would be given more lenient sentences and suspended prison terms.

Sondhi was taken from the court to Bangkok Remand Prison while Saowalak and Yupin were sent to the Central Women's Correctional Institute shortly after the sentences.

Sondhi built Manager Media into one of the country's largest media groups in the 1990s, but subsequently suffered massive financial losses in the wake of the 1997 Asian economic crisis.

In 2005, Sondhi used his ASTV satellite television channel to launch a public crusade against Thaksin, and became a leader of the yellow-shirt PAD movement which mobilised tens of thousands of protesters against Thaksin in mid-2006.