These photos show Naruedee Jodsanthia, 17, before (left) and after. She says the damage was caused by a ceramic cup thrown by her physical education teacher, which hit her in the left eyebrow, damaging the nerve. (Photo by Pongpat Wongyala)

PATHUM THANI - A mother whose teenage daughter has a facial deformity after being allegedly hit by a cup thrown by a teacher says the school is refusing to accept full responsibility and local police will do nothing about it.

Pranee Jodsanthia, 48, took her case to the media on Tuesday, complaining that although she had filed a complaint with police over a month ago, they had taken no action.

Mrs Pranee alleged that her 17-year-old daughter Naruedee had suffered facial nerve damage when hit by a ceramic cup thrown at her by a teacher at Chokchaisamakkee School in Nakhon Ratchasima's Chok Chai district.

She had decided to seek help from the media while they were in Pathum Thani, on their way to Ramathibodi Hospital in Bangkok.

Miss Naruedee, known as Sai, said that on Aug 8 the physical education teacher at the school made the students sit in rows outdoors while waiting for his class. However, she had to stand up because the ground was too hot to sit on where she was.

The teacher, she identified only as Paitoon, became furious and allegedly threw a ceramic cup which hit her on the left eyebrow. She claimed the teacher said he intended to inflict a cut on her head.

Miss Naruedee said she did not tell her parents when she returned home that day, but that night when she was brushing her teeth, water poured out of her mouth, and she was unable to close it completely.

Looking in a mirror, she saw her mouth was twisted to the right. When she went to bed she was unable to close her left eye.

Miss Naruedee said she and her mother went to Chok Chai police station the following day, but police there did not give them a copy of the complaint for fear the family would post the matter online.

Mrs Pranee said she met the school's director, who first promised to pay all medical costs for the treatment of her daughter. At the time she was satisfied, but treatments at hospitals in Nakhon Ratchasima were unsuccessful. Her daughter's face remained deformed because the nerve was swollen.

Then they went to Ramathibodi Hospital in Bangkok, where the cost of treatment for the affliction was estimated at 300,000 baht.

Informed of the figure, the school director said he would pay only 80,000 baht and challenged the family to sue for more, she alleged.

Mrs Pranee said she could not afford a lawsuit. The teacher should not have reacted that way. The physical education teacher had never even contacted her family. 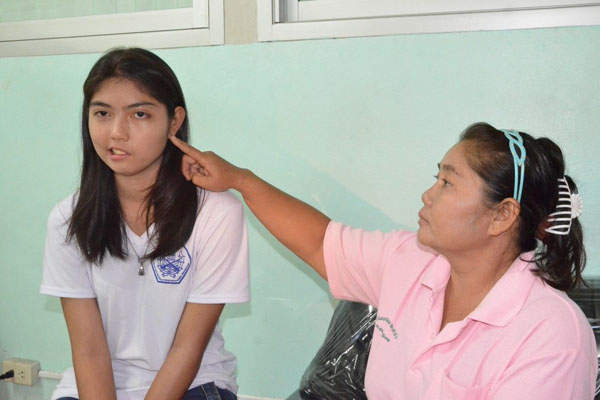