Worshippers pay respect to the Erawan Shrine on Aug 16, a year after the bomb exploded at the shrine on the evening of Aug 17, 2015. (Bangkok Post file photo)

The trial of two Chinese Uighurs accused of the deadly Erawan shrine bombing was postponed for a second time on Thursday as the court again failed to find a suitable interpreter for the defendants. 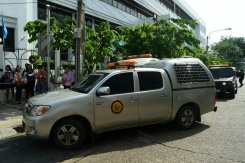 A vehicle carrying two Chinese nationals, suspects of the Erawan Shrine bombings, arrives at the military court in Bangkok on Sept 15, 2016. (Photo: AFP)

The August 2015 bombing left 20 dead at Ratchawong intersection in the centre of the city in an unprecedented attack.

The two accused, , were scooped up by police in the days after the bombing and have been held in military custody ever since.

Both deny the charges.

More than a dozen ethnic Chinese tourists were among the dead when explosives in an abandoned backpack detonated in the Hindu shrine popular with tourists on Aug 17 last year.

The timing prompted speculation that the attack was planned and launched in revenge for their deportation.

Thai authorities have rejected the theory and insist the attack was in retaliation for a crackdown on a people-trafficking gang.

On Thursday a court-appointed interpreter, a female Uzbek immigration detainee, was turned down by both defendants.

"I can understand (the Uzbek) translator... but not well," Yusufu told the military court in English.

The military prosecutor had earlier refused an interpreter provided by the defence, according to a judge, who told the court that "the case is a security matter... so the court provided a translator from immigration (detention centre)."

"The court will seek a new translator and postpones the case to October 13 and 14," the male judge, who cannot be named, added.

Sirojiddin Bakhodirov accused police of planting drugs on him as punishment for helping Thailand's Uighur community - a charge officers denied.

"Getting proper translation is a serious matter and not easy for any court," Sam Zarifi, of the International Commission of Jurists, told AFP.

"But this is a very high-profile case for the Thai government and they've had months to prepare so it's unclear why they can't provide the necessary translation, while the suspects are being held without a trial."

Prosecutors accuse Mohammed of placing the bomb inside a backpack at the shrine and say Mieraili was involved in transporting the device.