Virgins gather in the hope of becoming a 'Goddess'
Thailand
General

Virgins gather in the hope of becoming a 'Goddess'

Tassayaporn Wongsaksirikul, 16, a Matthayom 4 student is this year's Guan Yin Goddess winner who will play a central role in Chinese New Year celebrations in the Central Plains (Photos by Chalit Poomruang).

A large crowd gathered at a sacred shrine in central Nakhon Sawan province on Thursday to watch five beautiful young virgins of Chinese descent compete in a traditional contest that relies only on pure luck and faith.

The winner gets to be “worshipped” by the entire city.

The sacred ceremony was held at Nha Pha God-Goddess Shrine in Nakhon Sawan municipality to select a young virgin to represent Guan Yin, the Goddess of Compassion.

It is part of the preparations for the popular Chinese New Year celebrations at Pak Nam Pho in this central province which is heavily populated by Thais of Chinese descent.

The rite to find Guan Yin as well as the celebrations have been passed down through the generations. The annual grand festival will be the 101st year of the celebration and will last for 12 days from Jan 21 to Feb 1.

The five virgins are the finalists from a total of 20 candidates aged between 16 and 20.

For selection, the contestants needed luck only, just as they have for a hundred years. All they had to do was throw a pair of wooden bars in front of Pak Nam Pho God-Goddess three times.

When the bars hit the ground, the winner twice needs to have one wooden bar facing up and the other facing down. The third throw she needs both pieces facing down.

This year's Guan Yin winner is 16-year-old Tassayaporn Wongsaksirikul, who is in Matthayom 4 in a local school.

The ceremony is regarded as sacred by Guan Yin worshippers who believe the winner is directly chosen by the Goddess. The winner’s prize is the belief that she and her family have been given good luck and are blessed to play the role of Guan Yin.

Tassayaporn will dress as Guan Yin when she joins a procession to be held around town on Jan 30 and 31.

Her father, Narong, said all members of his family worship the Goddess and everyone was happy about the result. 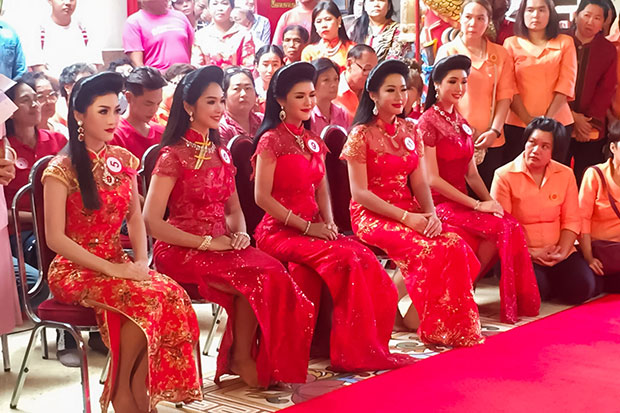