The new passenger terminal at Phuket airport was officially opened on Friday morning, doubling passenger capacity and opening new opportunities for tourism and trade on the resort island and in neighbouring provinces.

The official ceremony was presided over by Prime Minister Prayut Chan-o-cha, who used the opportunity to announce he would eliminate illegally operated taxis from this and other airports across the country.

He did call for patience, however, admitting that it could not be done overnight.

"All mafia have to go, under this government," Gen Prayut said. "This government is gradually solving the problem, including influential figures, especially taxis, at all airports, regardless of the colour of the uniform (of the people backing them)."

Illegal taxis are common at major airports. They are reported to be backed by influential people, or even officials,  who have resisted all previous attempts to remove them. A prime target for the government is to rid  Suvarnabhumi airport of their presence. (continues below) 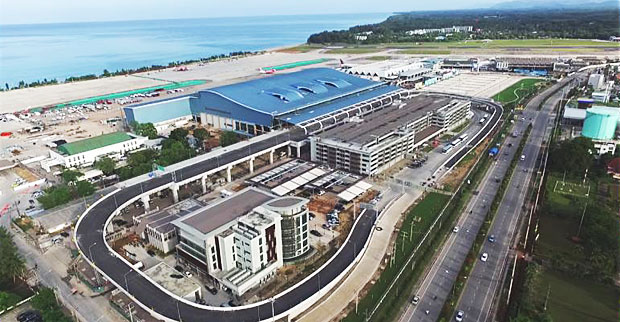 A bird’s-eye view of the new passenger terminal (with blue roof), a key part of Phuket airport’s long-delayed expansion. (Airports of Thailand photo)

The new passenger terminal at Phuket began operating around midnight on Thursday. The official opening was delayed until later on Friday morning so the prime minister could attend.

The terminal is part of a 5.14-billion-baht plan to expand the airport.

The four-storey building doubles the capacity of Phuket airport from 6.5 million passengers annually to 12.5 million, according to a statement issued by Government House.

Gen Prayut said the new terminal underlined the government's determination to improve transport infrastructure across the country. The building would benefit tourism and serve future investment in Phuket and neighbouring provinces.

The prime minister flew from Bangkok to Phuket by army plane on Friday morning, but his departure was delayed when he had to switch planes after an instrument failure was reported in the first aircraft.