Police inspect the crime scene in the parking lot of Camp Beer pub on Koh Samui. Two people, one a policeman, were shot dead by and five others wounded during a wild brawl in the early hours of Friday. Another policeman was later arrested and charged. (Photo by Supapong Chaolan)

SURAT THANI - A policeman who opened fire on a crowd after a brawl at a pub on Koh Samui overnight has been dismissed from the force and faces multiple charges of murder and attempted murder.

Two people were shot dead, one a fellow policeman, and five others wounded, two of them also policemen, during the rampage.

Pol L/Cpl Narongsak Khamjai, of Bo Phud police station, fled from the scene after the shooting and was later caught and arrested.

Reports said he had been charged with murder, attempted murder and carrying a gun in a public place.

The five other policemen involved in the brawl before the shooting, including the wounded officers, had been transferred to inactive posts at the provincial police operations centre pending a disciplinary investigation, he said.

All were rushed to hospitals, where two were later pronounced dead. They were  Pol L/Cpl Jaerasak Sroisangvarn and Kraisorn Mingsakul, a guard at the pub.

Police investigators reported that seven policemen attached to Bo Phud police station were having a night out at the pub.

While dancing they became involved in a brawl with a group of young men. Security guards intervened and asked them to leave.

After emerging from the bar, Pol L/Cpl Jaraesak pulled out a pistol. The pub manager tried to stop him and the chaos then erupted.

Another policeman, identified later as Pol L/Cpl Narongsak Khamjai, fired shots from his 9mm pistol into the crowd gathering in front of the pub. The bullets hit three fellow policemen and four pub staff, including the manager. After the shooting he drove off in his car.

Police sent to the scene found bloodstains and six spent cartridges in the parking lot of the pub.

CCTV footage showed Pol L/Cpl Narongsak opening fire at the crowd. He was later caught and arrested on charges of murder, attempted murder and carrying a weapon in a public area. 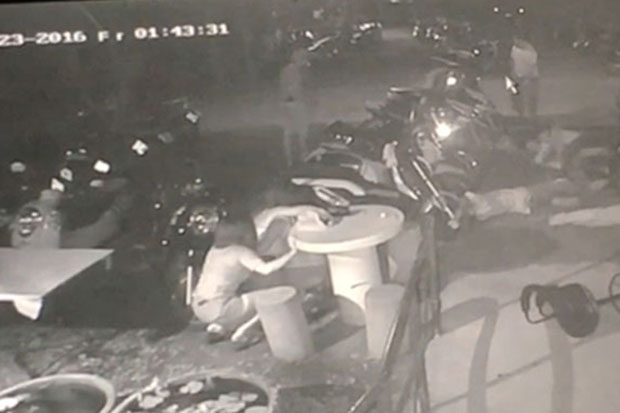 A woman seeks shelter by a table during the shooting outside Champ Beer pub in Koh Samui district, Surat Thani, in the early hours of Friday. (CCTV footage from Supapong Chaolan)

Pakistan's parliament to debate whether to expel French ambassador

LAHORE, Pakistan: Pakistan's parliament will debate Tuesday whether the country should expel the French ambassador as the government bids to appease a radical party that has threatened more violent protests unless the envoy is kicked out.

Health authorities on Tuesday assured the public there were sufficient hospital beds for the rising number of coronavirus patients, amid a new wave of infections this month that has spread fast across the country.

HarmonyOS: Connecting to a Simpler Life