CHON BURI— Two tattooed Australian bikers involved in an assault on two Thai brothers in Pattaya reported to police on Friday and paid 150,000 baht in compensation to their victims.

Daniel Anthony Stalley, 34, and John Lee, 43, both members of the Hells Angels motorcycle club, turned themselves in to Pattaya police chief Pol Col Apichai Krobphet and made statements regarding the Sept 17 incident. 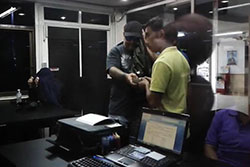 One of the two Australian bikers hands over the 150,000 baht cash compensation to one of the two brothers at Pattaya police station. Reporters were not allowed into the room. (Photo by Chaiyot Pupattanapong)

They were escorted to the police station by Pol Maj Piyapong Ensarn, tourist police inspector.

The two Australians were among three foreigners captured in CCTV footage beating one of the victims to the ground, with another foreigner allegedly carrying a knife standing nearby. The incident occurred in front of a beer bar in South Pattaya, Bang Lamung district, on the evening of Sept 17.

After the two-hour questioning session, police said the pair admitted they were involved in the attack on Ponran Chartbut, 22, and his elder brother Natthapong Pooncharoen, 24.

The two agreed to pay 150,000 baht in compensation for damage caused to the two brothers.  They also gave 5,000 baht to another man, Nopparat Prakhongyot.

Pol Col Apichai said police were awaiting the results of medical examinations before deciding whether to charge the two Australians with causing grievous bodily harm. If so, it would be a criminal offence and the case could not be compromised, the Pattaya police chief said. Charges and legal action would be brought against them.

Police would summons another foreign man allegedly involved in the attack for questioning before wrapping up the case.