A Portuguese man-of-war is shown on a beach in Phuket. The Portuguese man-of-war is a siphonophore, an animal made up of a colony of organisms working together. It gets the name from the uppermost polyp, a gas-filled bladder, or pneumatophore, which sits above the water and somewhat resembles an old warship at full sail. (Photo by Achadtaya Chuenniran)

PHUKET - Holidaymakers have been banned from swimming at three beaches in this tourist province after deadly poisonous jellyfish-like creatures were recently spotted there.

The animals are considered the world’s most venomous species, he added. People touched or stung by it would suffer severe pain. Its venomous stings could cause shock and heart failure, said Mr Kittiphat.

According to the National Geographic website, a man-of-war sting is excruciatingly painful, but rarely deadly. Even dead man-of-wars washed up on shore can deliver a sting. 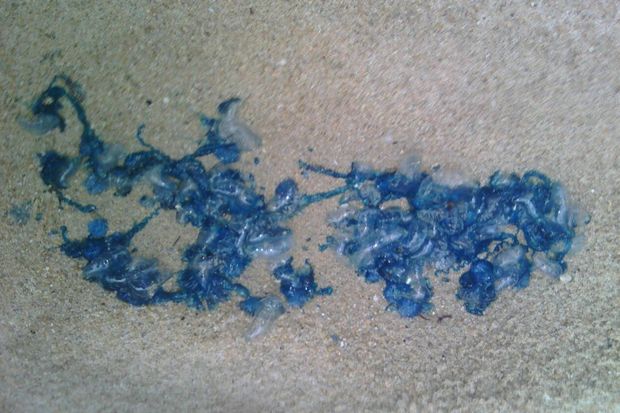 A Portuguese man-of-war is shown on a beach in Phuket. (Photo by Achadtaya Chuenniran)