The petrol station in Pattani's Khok Pho district where a woman was shot dead and then seven people wounded by a bomb explosion a short time later in a double-tap attack on Thursday. (Photo by Abdulloh Benjakat)

NARATHIWAT/PATTANI - Two people were killed and nine others wounded - civilians, police and ranger volunteers - in attacks by gunmen and bombers in two provinces on Thursday as the unrest in the far South showed no signs of abating.

In Narathiwat, 10 men travelling on five motorcycles and wearing women’s head scarves opened fire on three defence volunteers resting near a pedestrian bridge outside Luporluesong School in Sungai Kolok district around 11am on Thursday.

The shots were fired by pillion riders armed with AK rifles. Defence volunteer Usaman Rupae was hit and fell dead on the spot, and the two were others seriously wounded by bullets. Volunteer Surin Laesuk was hit in the left leg and Marorsuedee Talulae in the right shoulder, said Pol col Chanawut Khudsai, duty chief investigator at Munor police station in Sungai Kolok district.

Police and soldiers sent the scene rushed the two wounded defence volunteers to a nearby hospital. The bullet-ridden body of slain Usaman was found lying face down.

About 60 spent AK cartridge cases were found scattered over the area.  The front wall of a nearby house was riddled with bullet holes.

Investigators said the three defence volunteers were sitting on chairs near the pedestrian bridge in front of the school when the attackers arrived on the five motorcycles and the pillion riders started shooting.

Usaman fell dead and the two other volunteers fled toward the nearby house, chased by a hail of gunfire. After the attack, the gunmen stole one M16 rifle and two AK rifles from their victims and fled on the waiting bikes. 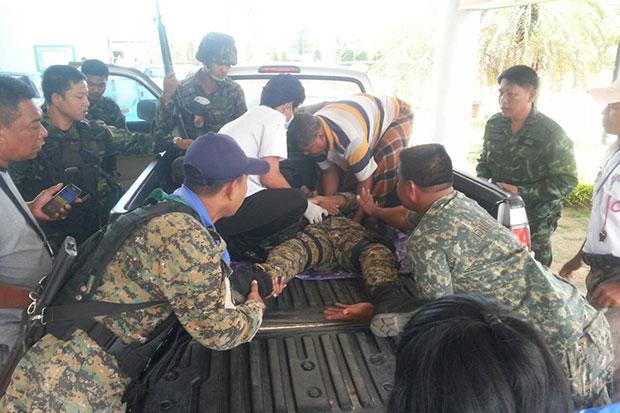 A wounded defence volunteer is rushed to a nearby hospital following the attack in Narathiwat on Thursday morning by gunmen wearing women's head scarves. One volunter was killed and two wounded. (Photo by Waedao Harai)

In a double-tap attack in Pattani, a pump attendant was shot dead at a petrol station in Khok Pho district and seven other people wounded by a bomb explosion that followed shortly after.

Below: Crime scene tape cordons off the scene of the fatal  shooting and bombing at a petrol station in Khok Pho district of Pattani onThursday. (Photo by Abdulloh Benjakat) 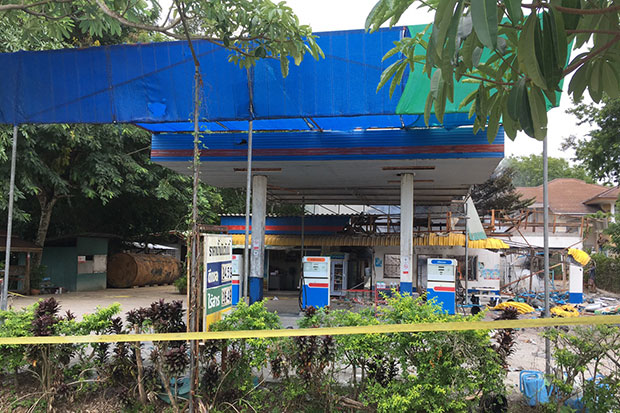 How coronavirus spreads in a tiny drop of water

NEW YORK: To better understand the coronavirus’s journey from one person to another, a team of 50 scientists has for the first time created an atomic simulation of the coronavirus nestled in a tiny airborne drop of water.