LAMPANG - One tusk of a pet bull elephant killed in a crash with an inter-provincial bus in Hang Chat district is missing, a senior police officer said on Sunday.

The left tusk, about 70cm long and weighing 2kg, broke off after “Plai Udom, 8, was killed when the bus rammed into it on late Friday night. Since the crash, the broken tusk has not been found, Pol Lt Col Somboon Yaya, deputy investigation chief at Hang Chat police said.

A team of police is trying to find the missing ivory, said Pol Lt Col Somboon. Police would coordinate with local reporters who had video clips of the incident to find clues about the broken tusk.

The other tusk was found with the carcass of the elephant, which weighed about 2,000kg.

The Bangkok-Chiang Mai air-conditioned bus, carrying 25 passengers, was travelling from Lampang to Chiang Mai when it hit the pachyderm as it was walking on the road near Khun Tan hill in Hang Chat at around 10pm on Friday.

The jumbo was directly hit and its body was crushed beneath the front wheels. It died on the spot. Bus driver Narit Jittrong was badly hurt and trapped in the driver’s seat, but passengers on board were not injured.

Veterinarians have already conducted an autopsy of the carcass of the elephant. The remaining tusk and part of the broken tusk were removed and handed over to the Elephant Reintroduction Foundation for ivory registration, said Pol Lt Col Somboon.

Plai Udom, was under the care of the foundation, which was about to release it into Doi Phamuang wildlife sanctuary in Hang Chat district. The elephant was learning to adjust to forest conditions. 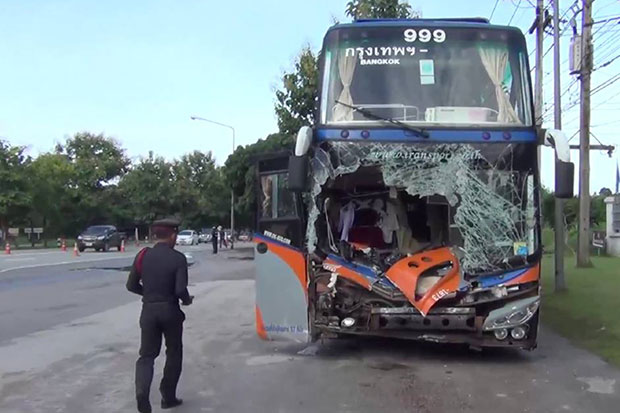 A police officer inspects the crash scene in which an elephant was killed after being hit by this inter-provincial bus in Hang Chat district, Lampang on Friday night. (Photo by Aswin Wongnorkaew)