Students look at a dead stingray floating in front of Wat Khu Thamsathit in Khlong Bangkantaek, which is linked to the Mae Klong River in Samut Songkhram's Muang district. A total of 15 stingrays have been found dead in the river since late last month. Authorities are scrambling to determine the cause. Pattarapong Chatpattarasill

Mae Klong riverside residents in Samut Songkhram have expressed concerns about the recent and mysterious mass deaths of giant stingrays, something they said is unprecedented in this western region's key river.

Residents normally avoid catching stingrays due to their superstitious beliefs, while the animals are also a barometer of the fragile ecosystem in the river.

A total of 15 giant freshwater stingrays, a threatened species, have been found dead since Sept 29.

"I have never seen anything like this before," said Ubon Chanbandit, a 60-year-old housewife and a former fisherman in Muang district.

"Dead fish were found in the river last year due to wastewater but for this many stingrays to die like this, this is the first time I've seen it happen," she said.

Sompon Wangcharoen, a 75-year-old retired public relations worker for Tai Had Tambon Administration Organisation (TAO), echoed Ms Ubon's remarks, saying he has never seen this number of stingray deaths since working at the TAO 20 years ago.

He said the river was once polluted by a sugar plant which released wastewater into the river in 2010, which resulted in the deaths of fish and prawns. But this time, the water did not give off a bad smell, which is the first indication of water pollution, he said.

Chatree Tharasaeng, head of the fisheries office in Samut Songkhram's Muang district, said all parties concerned are expediting efforts to determine the cause of the stingray deaths.

He said there was a recent drop in plankton as a result of a large amount of rainwater, which also leads to poor water quality. But it remains unconfirmed whether this can be linked to the stingray deaths, he noted.

Piya Promsathit, Chief of the Regional Environment Office 8, said officials found that water samples in three locations upstream from the Mae Klong River in Ratchaburi had lower than standard levels of oxygen.

However, a joint effort is required from several agencies to confirm the cause of the stingray deaths, including an examination of the dead stingrays' tissue and an analysis of water in the river, he said. 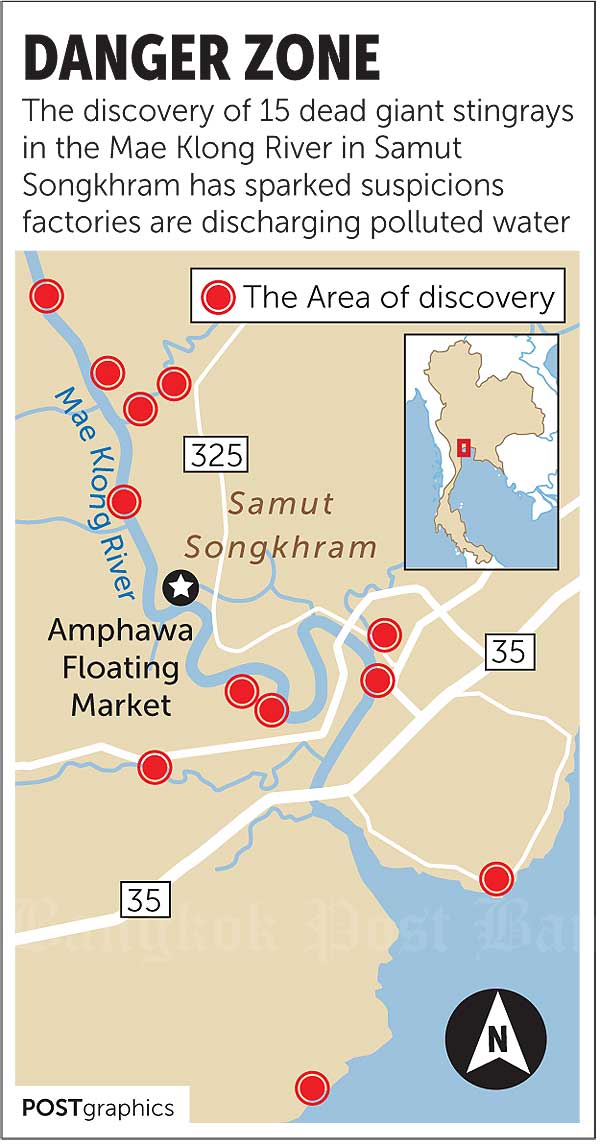 Examining the biological characteristics of the river may take a week, he said.

The incident also sparked suspicions that some factories may have discharged polluted water into the western region's major waterway.

An environmental protection group in Ratchaburi has filed a complaint against a Ban Pong-based sugar factory, suspecting it may have discharged foul water into the Mae Klong River.

Rattawut Wallathanaroj, secretary-general of the network for environmental protection and against corruption, said provincial industrial authorities took water samples from the factory's outlet pipe to check for pollutants.

Mr Rattawut said the river banks are dotted with large industrial plants, some of which may be in breach of environmental regulations.

"It must be investigated whether water discharged from these Ratchaburi-based factories is linked to the death of the stingrays," said Mr Rattawut, adding he believed there is connection given the location of Samut Songkhram at the river's end, that makes it a catchment area.

An official at the Ratchaburi Industrial Office said he was still waiting for the results of the tests on the discharge from the sugar factory.

"In fact, the factory does treat the water but regulations state it must store water for farm use, not release it into the river," he said.

The Ratchaburi-based factory was a long way from where the stingrays were found. At this stage, it is not known if the factory is to blame.

"We are working with officials in Samut Songkhram to establish the cause," said the official, who asked not to be named.