Thais don pink for His Majesty

Well-wishers gathered by the hundreds outside Siriraj Hospital. (EPA photo)

Thais nationwide are wearing pink to express their best wishes for His Majesty the King's good health as huge crowds of well-wishers flocked to the Grand Palace to sign get-well books Tuesday.

The Royal Household Bureau on Tuesday opened the Sala Sahathai Samakhom pavilion inside the Grand Palace to allow the general public to sign get-well books for the world's longest-serving monarch.

The public can sign the get-well books at the pavilion from 8am and 6pm.

On Tuesday Prime Minister Prayut Chan-o-cha  led cabinet ministers, armed forces leaders and their spouses to sign get-well books for the good health of His Majesty at the pavilion.

Following the Royal Household Bureau's (RHB) 37th announcement on the condition of His Majesty's health, messages have been shared on social media urging Thais to wear pink - a colour which became associated with the King a few years ago when royal astrologers said the colour was good for the King and would help promote his well-being.

Since then, the King has been seen wearing pink in public on several occasions.

Siriraj Hospital was an ocean of pink shirts Tuesday, as well-wishers clad in pink braved the rain to wish His Majesty a speedy recovery from his illness. 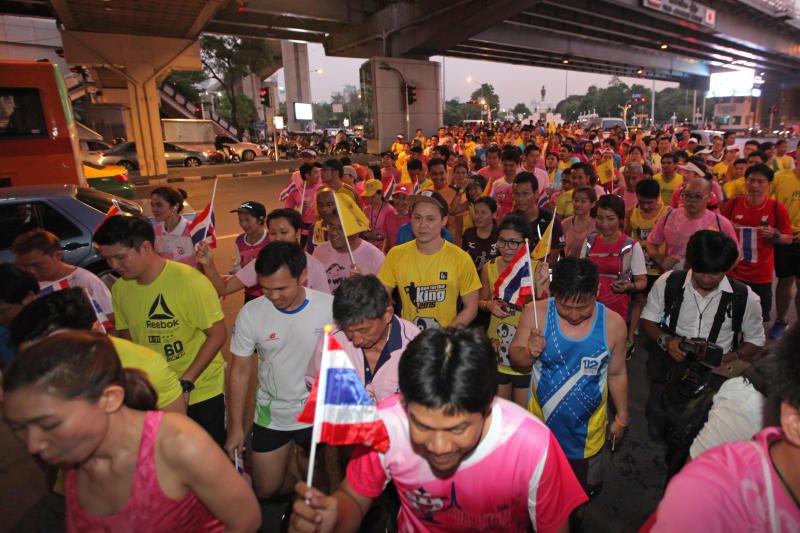 As if by instinct, hundreds of Thai flocked to Lumpini Park early Tuesday evening to hold mass prayers for His Majesty. (Photo by Wichan Charoenkiatpakul)

His Majesty the King will turn 89 on Dec 5 this year.

Wanna Sirikhet, a 69-year-old woman from Narathiwat province, said she decided to travel more than 1,100km from her hometown, the country's southernmost province, to Siriraj Hospital after learning about the statement on the King's health and the "Wear Pink for His Majesty" campaign on social media.

Ms Wanna said she always visited Siriraj Hospital to join prayers for His Majesty's recovery every time the palace stated that the King's health was not stable.

"I came here to pray for the King and I believe that millions of Thais nationwide are now praying for his quick recovery as well," she said.

Sanong Suwanmart, a 80-year-old man from Rat Burana district clad in a pink shirt, said he had accompanied his wife to the hospital to join the prayer chanting.

"We wanted to convey the message to His Majesty the King that people nationwide have united in giving him encouragement and moral support, and hope that he will get better soon," Mr Sanong said.

Ruangthong Sa-ardpai, a 52-year-old farmer from Suphan Buri province, said she actually came to the hospital to see a doctor for her own illness, but when she heard that there was a group of people praying for His Majesty, she did not hesitate to join them.

"I just bought a pink T-shirt here and wore it. It's the least I could do for my beloved King. I want him to remain a symbol of national unity," she said.

Many Thais queued up to buy pink shirts at Wang Lang market located opposite Siriraj Hospital.

Savitree Jamjod, 47, a clothes shop owner, said pink T-shirts are now in high demand due to the "Wear Pink for His Majesty" campaign.

"All of my pink-coloured goods were sold out within a couple of hours. I think it may take at least two weeks before the supply matches demand," Ms Savitree said.

Nopparut Klumtong, 26, a private employee, said he went to Sala Sahathai Samakhom to write his best wishes for His Majesty the King.

He said his family is very concerned about His Majesty's health, so they might wear pink every day until the King's health has improved," he said.

A Facebook page called "We Love Thai King", which has more than 2.5 million members, started the social media hashtag #wishthathismajestyrecoverssoon.

In Sukhothai, more than 200 people wearing pink T-shirts joined in chanting prayers for His Majesty the King at Wat Thai Chumpol in Muang district.

People in Chon Buri's Si Racha district wore pink shirts to express their loyalty to His Majesty and wish the monarch a speedy recovery from his illness.

According to the 37th announcement issued on Sunday by the bureau, royal doctors have performed haemodialysis on His Majesty the King and used drugs to control his blood pressure.

The bureau said doctors carried out haemodialysis on Saturday to purify his blood of toxins, and changed a tube that drains excess spinal fluid from 2pm to 4.40pm.

After the procedure, his blood pressure dropped occasionally, the bureau said.

Medicine was administered and doctors put His Majesty on a ventilator in order to bring his blood pressure back up to normal levels.