A resident secures one of the 15 dead giant stingrays found floating in front of Wat Khu Thamsathit in Khlong Bangkantaek, which is linked to the Maeklong River in Samut Songkhram's Muang district. (Photo by Pattarapong Chatpattarasill)

Wastewater discharged from factories is likely to be behind a sudden spike in deaths of stingrays in Samut Songkhram, but lab test results may not be able to provide a link to the culprits, says the Department of Pollution Control.

A lab test is needed to clarify the source of chemicals or toxic substances that killed the rays and is expected on Friday, said Wicharn Simachaya, the department's chief.

His team collected samples of water and sediment from different spots along the Mae Klong River, from Samut Songkhram to Kanchanaburi, for tests to identify heavy metals and chemicals that might point to the cause of the unusual deaths.

At least 15 stingrays have been found dead since Sept 29.

Even with the lab findings, it will be impossible to single out the factory that discharged the wastewater, he said.

"Most factories are using the same chemicals, so it's difficult to point to a wrongdoer," he added.

The high death rate prompted authorities to collect more samples from nearby Don Hoi Lot, a local source of razor clams which have also started dying.

Meanwhile, Nantarika Chansue, a vet from Chulalongkorn University who disclosed the spike in deaths of the rare species of rays on her Facebook, insisted tests showed the cause of the deaths was not natural, citing findings by the Animal Health Institute that found toxic contamination in the livers and kidneys of some of the dead stingrays.

Toxins were found at 20 times the normal level which showed the kidney had to work hard to get rid of the toxin from their bodies, she said.

"We can't tell what kind of factory released the toxins, but it was clear the toxins were not from the farming sector because the amount of contamination was too high," she said. She also ruled out natural causes as too many of the rays had died.

She was concerned the stingrays kept dying, as there are only about 150 left in the river. 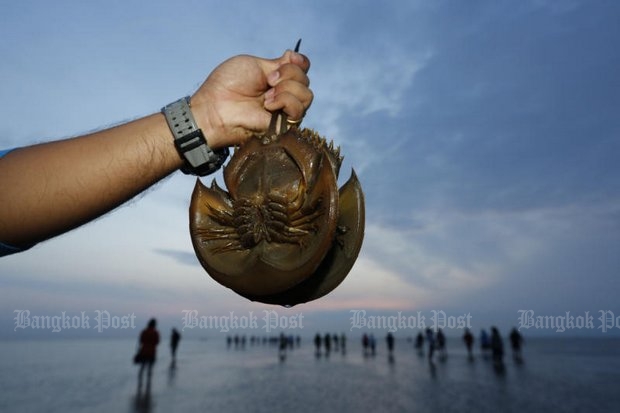 There is still plenty of life at the moutn of the Maeklong, but hundreds of factories spew wastewater discharges, threatening the ecology. (Photo by Pattanapong Hirunard)

An ethanol plant in Ratchaburi admitted that one of its waste water pipes broke, leading to wastewater discharges into the river. It is in the process of fixing it.

It said the incident happened on Sept 30, but the stingrays started to die a few days before that. However, locals argued the leak started long before the factory claims.

Meanwhile, Prime Minister Prayut Chan-o-cha has ordered officials to find out the cause of the stingray deaths, saying the rays should be conserved as they are an indicator of the condition of the river.

Officials were also instructed to look into the cause of the deaths of fish raised in baskets and take care of the fish farmers, the premier said.

Samut Songkhram governor Kanchat Tansatien said he instructed agencies to collect samples of water and sediment in four locations along the river to find out the cause of the deaths.

Referring to the mass deaths of razor clams in the province, Mr Kanchat said water quality was likely to be the cause. Tests would be conducted. 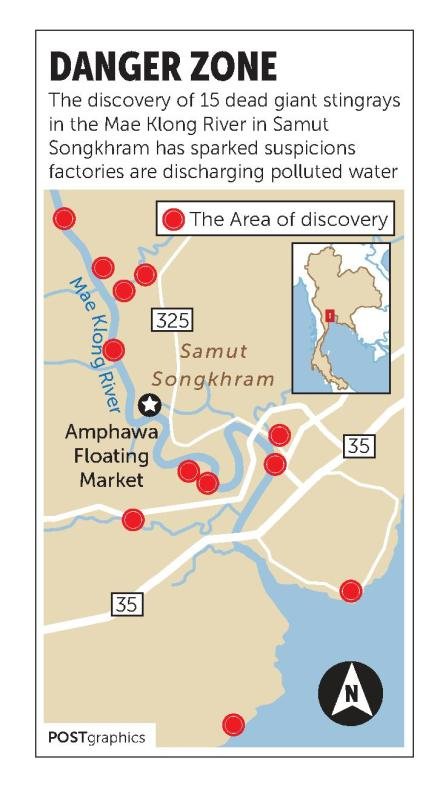