HRH goes back to work in UN role
Thailand
General

HRH goes back to work in UN role

Her Royal Highness Princess Maha Chakri Sirindhorn has been named as the new United Nations' Food and Agriculture Organisation (FAO) Special Ambassador for Zero Hunger as she joined ordinary Thais in heading back to work Monday.

The announcement marked Monday's global World Food Day when the FAO convened the Asia-Pacific regional observance at its regional office in Bangkok.

"His Majesty King Bhumibol Adulyadej has shown us the way in his pursuit of improvements in sustainable agriculture for Thailand which is a country so important in food production for the world. Your Royal Highness has also carried forward that quest for improvements to agriculture,'' said Kundhavi Kadiresan, FAO assistant director-general and regional representative.

HRH Princess Maha Chakri Sirindhorn has also beeen granted assent by HRH Crown Prince Maha Vajiralongkorn to make the final decisions in the construction of a Phra Meru for the royal cremation,

HRH Princess Maha Chakri Sirindhorn had launched many royal projects, here and across the region, advocating an end to hunger and improving nutrition.

HRH Princess Maha Chakri Sirindhorn presided at FAO Monday. It was the princess's first appearance in public since His Majesty the King's passing last Thursday. A commemorative scroll signed by FAO director-general Jose Graziano da Silva was given to the princess in her new role as ambassador.

Theerapat Prayurasiddhi, permanent secretary to the Ministry of Agriculture and Cooperatives, said the princess supports countries in the region pursuing sustainable development. "She has asked us to look into water management for farming to reaffirm that fighting for zero hunger is an achievable goal," said Mr Theerapat.

At the event, HRH Princess Maha Chakri Sirindhorn also presented model farmers awards to five people from Fiji, Mongolia, Pakistan, Thailand and Vietnam. Alfred John Sahayam, the award winner from Fiji, said he was proud as his father was also awarded an FAO outstanding farmer award in 1983. "I hope my son will pursue the job and come back here to receive the award in the future," said Mr Sahayam, who was named for his contour farming and inter-cropping efforts in Fiji.

Oyunchimeg Yadam, the winner from Mongolia, said the award would encourage her government to help support greenhouse agriculture production.

Meanwhile, Dilok Pinyosree, 39, a masters degree holder who works on his father's farm in Chaiyaphum, said he has applied technology and know-how to his sugar cane plantation. He avoids crop-burning as it can cause pollution and harm the environment. "Thanks to the King's self-sufficiency philosophy, I can make money from the farm and also look after the environment,'' said Mr Dilok. 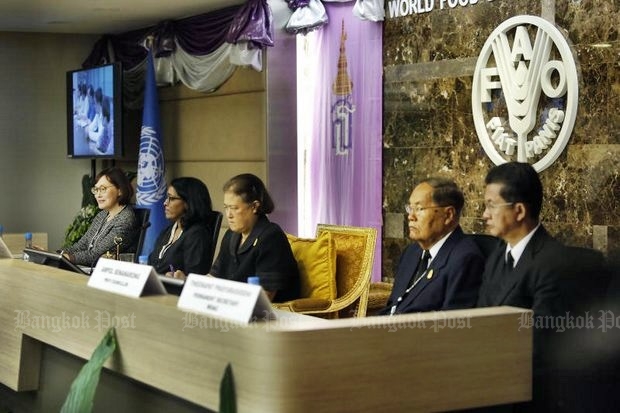