An injured baby elephant has been saved from hunters by Chanthaburi villagers and forestry officials are now looking for an adopted mother for him.

The three-month-old beast's front left leg was hurt by a trap when Moo 12 village chief Wandee Dokdin and four other villagers found the animal in weak condition in a jungle in Khaeng Hang Maew district in Chanthaburi on Wednesday night.

They led the baby elephant from the forest, put it on a pickup truck and took it to a wildlife office in Tha Takiab district in Chachoengsao in the early hours of Thursday. Veterinarians from Khao Ang Rue Nai Wildlife Sanctuary were sent to the office to treat its wounds. 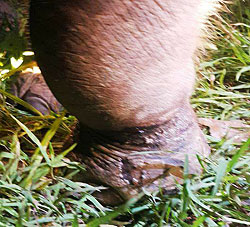 The wounds of the baby elephant to his front left leg. (Photo from Khao Ang Rue Nai Wildlife Sanctuary Facebook)

Decha Nilvichian, chief of Khao Ang Rue Nai Wildlife Sanctuary, said the calf was saved and its health was improving after vets fed it baby milk after medical treatment.

"Judging from the wounds, his leg could have been trapped for about three days," Mr Decha said. "His weight is about 100 kilogrammes."

The calf will stay at the sanctuary for more treatment with vets taking care of him around the clock.

"What we are worrying about is that he needs to be fed naturally," the official said.

Khao Ang Rue Nai Wildlife Sanctuary is contacting other elephant centres across the country to find out whether they have a female elephant ready to feed a baby.

"We have to find an elephant to feed him," Mr Decha added.