Authorities have launched a Bangkok campaign of indiscriminate arrests and detentions of students and youths who come from the far South, academics say.

According to the Thai Academic Network for Civil Rights (TANC), 44 students and youths from the southern border provinces were arrested during Oct 10-15 around Ramkhamhaeng University in Bang Kapi district.The government admitted only 14 arrests.

They were held in custody in various places and most were later released without charge, it said.

Of them, five were sent to the notorious Ingkayut Borihan Military Camp in Pattani for "interrogation" by military specialists after serving an initial seven days of detention at the 11th Military Circle in Bangkok. Another remains in custody at Klong Prem Central prison.

According to the TANC, another two young men from the far South were arrested on Wednesday in the Ramkhamhaeng area.

The arrests come just before Sunday's anniversary of the Oct 25, 2004 "Tak Bai incident", marking the deaths of 85 Muslim men after their arrest at a protest at the Narathiwat district town. The "incident", referred to in the region as the "Tak Bak massacre" is one of the most sensitive causes of resentment in the deep South. (See photos, below)

Deputy Prime Minister Prawit Wongsuwon admitted on Tuesday the regime detained five suspects linked to what he and deputy national police chief Srivara Ransibrahmanakul insisted was a plot to launch a car bomb attack in or near Bangkok.

But he said just 14 men, all from the deep South, were initially arrested. He said only five were still being held, while the other nine were released.

He and other security authorities insisted they have solid evidence to prove all five men were linked to "the foiled attack plan", but Gen Prawit declined to detail any of the proof.

"We would not have taken action if we didn't have solid evidence", he told reporters.

Thursday's account by the TANC group said almost everything the defence minister and deputy police chief said about the case was wrong, and charged them with abusing their powers by launching a crackdown based on nothing but the religion and home provinces of dozens of men.

Officials were also deployed to check Muslim student clubs at several universities in Bangkok. Students from the far South staying in Bangkok were worried and no longer wanted to stay in their living quarters, the TANC said.

As many were later released without charge, this suggests the arrests were indiscriminate. None were told of the accusations against them, or served with arrest warrants, it said.

Authorities also failed to inform relatives of the youths about where they were detained, and in the initial period, relatives were denied access to the detainees.

The TANC said it is unreasonable to search, arrest and detain youngsters from the far South in Bangkok by citing security issues, adding authorities are abusing their power. The detainees should be released without condition. The group also urges authorities to avoid exploiting the situation when the country is in grief.

The state should respect the diversity of ethnic groups and religions in the southern border provinces, it added.

The security operation came as deputy national police chief Srivara Ransibrahmanakul said last week police had received intelligence about possible attacks in three locations during from Tuesday to Oct 30 in the capital and nearby provinces.

Referring to the arrests of some suspects, Pol Gen Srivara said Thursday police were examining whether they were linked with the deadly Mother's Day blasts on August 11/12 which killed four and injured 35 in Prachuap Khiri Khan's Hua Hin and six southern provinces.

He called for calm, insisting the city remains safe.

Below: At Tak Bai, on Oct 25, 2004, youths were stripped and forced to lie face down, before being loaded aboard army trucks, where 85 were smothered to death. (AFP photos) 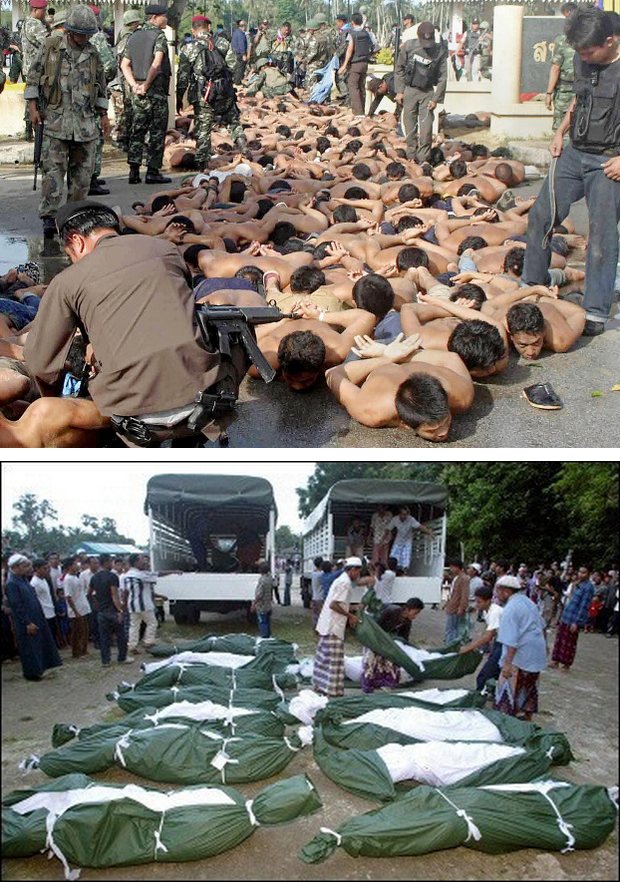