A tearful final song for His Majesty
Thailand
General

A tearful final song for His Majesty

UNITED IN GRIEF: Mourners wave pictures of His Majesty the King before singing the Royal Anthem for the last time at Sanam Luang on Saturday in a mass tribute organised by filmmaker MC Chatrichalerm Yukol. (Photo by Patipat Janthong)

The Royal Anthem reverberated around Sanam Luang and the grounds of the Grand Palace one last time on Saturday as hundreds of thousands of mourners sang for the late King Bhumibol Adulyadej.

Many of the black-clad mourners were unable to hold back tears as they waved the King's portrait for the mass tribute organised by filmmaker MC Chatrichalerm Yukol.

"We are going to have a new reign, so this is the last tme to sing this song to celebrate King Bhumibol," MC Chatrichalerm said.

"It's overwhelming to see such a large number of people joining the event. It's a historical moment to express our love for our King Bhumibol."

The crowd inside Sanam Luang was estimated by police to be around 150,000, with roughly the same number spilling into nearby streets including Ratchadamnoen Avenue. People began streaming into Sanam Luang early in the morning to secure the best spots. The ground was soon packed and turned into a sea of solemn black dotted by umbrellas, the only source of shade from the sun, as organisers cued participants on the singing.

The entire event was filmed under the direction of MC Chatrichalerm, widely known as Than Mui. The film will be viewed later on television and at cinemas nationwide.

After some rehearsals, the singing, broadcast live on national television, officially got under way to music played by the Siam Philharmonic Orchestra under the baton of Somtow Sucharitkul, featuring 200 musicians, 100 instruments and 130 chorus singers.

The stage was set up in the middle of the field in front of the Grand Palace where the King's body was lying in state.

The first round of singing was from 1-2pm.

Many sponsors had pitched in to record the event, with 25 cameras, 25 microphones, two drones and three cranes deployed.

The final mass singing of the Royal Anthem was due to take place at 10pm, followed by a candlelight vigil.

Metropolitan Police Bureau commissioner Pol Lt Gen Sanit Mahathavorn said an estimated 300,000 people took part in the event, with 150,000 to 160,000 at Sanam Luang and the rest on nearby roads.

About 1,800 provincial police officers, 600 crime suppression officers and 2,000 traffic police were dispatched to provide security at the event.

Pol Lt Gen Sanit said some children had got lost, although security surveillance generally went without a hitch.

Government spokesman Lt Gen Sansern Kaewkamnerd said Prime Minister Prayut Chan-o-cha had thanked participants, who came from everywhere and were united by a common desire to show their love for the late King.

The military built a temporary wooden bridge over Khlong Lot overnight for the convenience of people accessing Sanam Luang yesterday.

Getting to Sanam Luang was a struggle for many. Shuttle boats reported heavy traffic, forcing some people to hire long-tailed boats to transport them to Tha Chang Pier close to the Grand Palace.

Somnuek Pongsupat, 87, and his family attended the event. He had met His Majesty 40 years ago when the King was visiting Cho Airong district of Narathiwat to inspect a tap water installation.

"I only had the chance to come today. It's such a sorrow in here," he said, pointing to his chest.

Nattharinee Nattayai, a second-year university student, said she came with friends from university. They brought sweets and drinking water to give away to other mourners.

Even though she is too young to have had any recollection of His Majesty's works in his early days, his sufficiency economy principle has taught her the value of being frugal, she said.

Somboon Muhamad Roson, 70, from Pathum Thani, said she still could not come to terms with the King's passing. "His Majesty was unassuming and charismatic. That's why people all over the country loved him," she said.

Khemika Plaingam, 44, said she woke up early yesterday and was lucky to squeeze her way into a packed bus heading to Sanam Luang.

She said she was glad to be able to sing for His Majesty, although she was disappointed the participants were not given adequate guidelines and instructions on the singing.

Meanwhile, a confederation of security guard businesses has installed surveillance cameras around Sanam Luang to support the policing operation.

The cameras have been put up at 16 security-blind locations after several pickpockets were reported by people queuing up outside the Grand Palace to sign a condolence book for the late King.

More cameras will be installed if necessary, with security guards from various firms to be deployed to help police man the areas, according to the confederation. 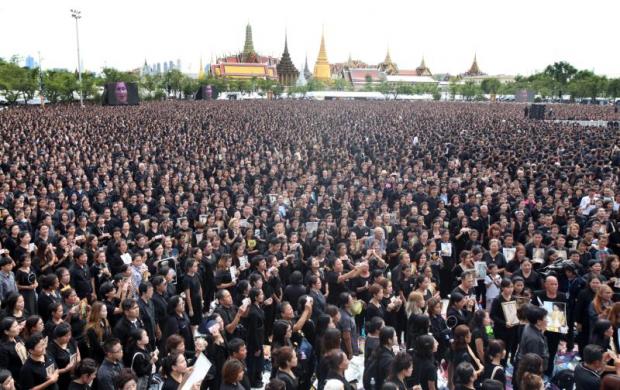