Somdet Phra Wannarat, the abbot of Wat Bowon Niwet Vihara, still remembers vividly his time in the monkhood with His Majesty the King Bhumibol Adulyadej, all of 60 years ago.

His Majesty the King was ordained as a Buddhist monk on Oct 22, 1956 at the ordination hall of Wat Phra Sri Rattana Satsadaram or the Temple of the Emerald Buddha when he was aged 30.

He was given the name Bhumibalo Bhikkhu and went on to stay at Wat Bowon Niwet Vihara for 15 days.

Somdet Phra Wannarat, 79, said the King was ordained in the same year as him, but he had stayed at the temple before as a novice.

Like the others at the temple, he frequently squinted at the Bhumibalo Bhikkhu with curiosity and found he strictly followed practices as a monk and did everything under Buddhist rules without exception.

"He was more observant of the monkhood practices than the other new ordained monks, including me. He had forbearance and morals which he had cultivated since he was young," he said.

Somdet Phra Wannarat said, for example, in daily morning and evening chanting sessions that lasted for about an hour each, the King came to sit next to the row of new ordained monks and positioned his legs in a way that did not point his feet at senior monks and stayed in that position until the chanting ceremony ended.

"No one could do this [not change position], but he could. He showed his utmost respect to the senior monks," the abbot said.

"With the case I raised, there is no need to talk more about how strict he was with monkhood practices," he stressed. 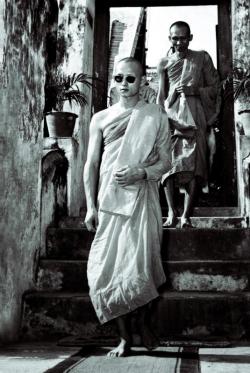 His Majesty the King Bhumibol Adulyadej when he was ordained as a monk and lived at Wat Bowon Niwet Vihara 60 years ago. (Photo courtesy of Office of the Supreme Patriarch's Secretary)

If Bhumibalo Bhikkhu had no schedule for alms rounds at the Royal Palace or state offices, he would join the other monks in the alms round at communities nearby the temple.

He also spent his limited time in the temple by studying the Buddha's teaching, at his residence.

During his time in the monkhood, the King also went to visit the Phra Pathom Chedi, the largest pagoda in Thailand, in Nakhon Pathom and Wat Phra That Phanom in the northeastern province of Nakhon Phanom.

Somdet Phra Wannarat expressed profound happiness when asked about his biggest impression of the King during this time.

"His Majesty told me that I performed good preaching, but was not sure whether ordinary people would clearly understand what I teach," he said.

"The King suggested I should adopt an allegory for preaching to make people understand it more easily," he said.

With His Majesty's suggestion, many years later, Somdet Phra Wannarat had an occasion to go to Klai Kangwon Palace in Prachuap Khiri Khan province to deliver an address to His Majesty the King.

On that occasion, he raised an allegory about two women who were competing to claim a child as their own by insisting they were the child's mother.

A judge who was a wise man declared that the woman who could pull the boy to her side was the real mother.

When the competition started, the two ladies tried to pull the boy to their side until the boy screamed with pain.

Immediately, one lady dropped her hands allowing the boy be pulled to other side.

The judge ruled the woman who released her hands from the boy was the real mother as she could not bear to hear the child's pain.

The story was raised as a comparison with the case of King Rama VII who released his absolute power as a monarch and accepted the constitutional monarchy in the Siamese Revolution in 1932 for the sake of the people's benefit.

Last week, Somdet Phra Wannarat was given a task he had never wanted to perform.

He was the monk leading the procession to take His Majesty's body from Siriraj Hospital to the Grand Palace on Oct 14. He made a wish to send the King to heaven while taking the body to the palace.

He said the country is in in mourning because the King was the country's soul, but added that people should be aware of Buddhist principles of truth.

The late His Majesty the King was in the monkhood from between Oct 22 to Nov 5, 1956. The King also gave his unused shoes to the monk who instructed him when he left the monkhood.

He did not wear the shoes, choosing to walk barefoot as ordinary monks do.

SYDNEY: A water-bombing plane was missing and feared to have crashed in Australia's southeast on Thursday, as firefighters battled a new outbreak of bushfires whipped up by scorching temperatures and strong winds.

Thailand is facing the worst drought in four decades, and the inadequate water supply from dams means farmers are hit the hardest.

SCB out of favour among analysts as bad loans rise

Siam Commercial Bank Plc, one of Southeast Asia’s largest lenders, has fallen out of favour with securities analysts after reporting fourth-quarter results that raised concerns about loan quality.