Deputy Prime Minister Prawit Wongsuwon has denied being involved in a move to set up a new political party despite claims by social activists who cited a senior military officer as Gen Prawit's representative.

The party, Athippatai Puangchon Chao Thai (Thai people's sovereignty), is believed to be a military-supported party. 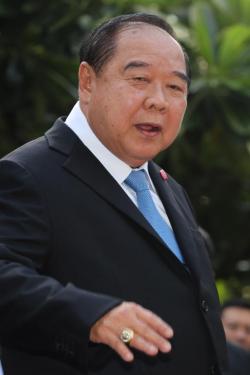 Prawit: 'Knows nothing' about party

Activists Saman Singam and Praphat Ngoksungnoen alleged in Nakhon Ratchasima that Lt Gen Tharakrit Thapthongsit, deputy chief of the Internal Security Operations Command (Isoc) Region 2, was behind the move, and was acting on behalf of Gen Prawit.

Gen Prawit, however, said it was news to him. "I know nothing at all," Gen Prawit, also defence minister, said after the cabinet meeting yesterday.

The deputy premier said he does not know the activists and wondered how they claimed to know Lt Gen Tharakrit, whose helps oversee the northeastern provinces, including Nakhon Ratchasima.

Activists Mr Saman previously played a role in a campaign to support Thailand's stance over the Preah Vihear Hindu temple conflict, concerning the disputed border between Thailand and Cambodia.

But Gen Prawit said he had no knowledge of his background and asked reporters not to link the reports to him. He insisted he has no desire to found any party.

Gen Prawit is part of the Burapha Phayak (Tigers of the East) military clique, along with key figures including Prime Minister Prayut Chan-o-cha and Interior Minister Gen Anupong Paojinda.