The lawyer preparing to defend herself
Thailand
General

The lawyer preparing to defend herself

Sirikan Charoensiri has made a career standing up for human rights, but she now faces charges herself after being accused of sedition in a case that has provoked widespread condemnation from international groups

DETERMINATION: Ms Sirikan slept on the pavement in front of the military court to prevent police searching her car without a warrant.

The black Honda CR-V parked in front of Bangkok's military court was sealed off by eight yellow barriers. Police officers taped A4 papers to each of the four door handles and trunk, and put a lock to the front wheel.

The car belonged to human rights lawyer Sirikan Charoensiri, who represented 14 activists arrested for violating a junta ban on political gatherings last June. After accompanying her clients to the court, police had attempted to search her car without a court warrant. Ms Sirikan resisted, later saying that she acted to protect her clients' confidentiality.

That night, in the presence of at least two uniformed officers, she slept on the pavement in front of the military court.

"The only thought I had in my mind was that if I had to meet my clients tomorrow, could I say that I had fully done my duty in protecting their rights?" the 30-year-old told the Bangkok Post Sunday at her office in Saphan Khwai.

It would be her first time representing a client in court, and the incident provided a test of what Ms Sirikan had been preparing herself for almost 10 years.

"It made me ask myself, 'Am I ready to be a human rights lawyer?'"

The next day, officers came with a warrant to search her car and took away five cellphones of her clients.

Ms Sirikan is now facing four legal actions, including a sedition charge which experts say is probably the first case against a lawyer in modern Thai history.

She spent her early childhood days in the northeastern province of Yasothon, where her father managed a small law office. She moved to Bangkok to attend Triam Udom Suksa School, one of the country's most prestigious high schools.

In 2003, Ms Sirikan went to the US for a one-year student exchange programme in Milwaukee, Wisconsin, which she describes as a "turning point" in changing her way of thinking.

During her last year in high school, Ms Sirikan decided she would study international relations at Chulalongkorn University. But it wasn't until she attended a volunteer camp in the South following the 2004 tsunami that she decided to switch to law. At the camp, a volunteer mentioned an incident in which an elderly Moken sea gypsy was accused of stealing a radio and was later assaulted by a staff member. 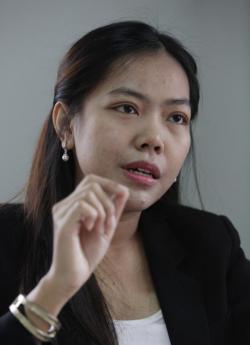 FIGHTING HER CORNER: 'It's pretty much clear that this is judicial harassment,' says human rights lawyer Sirikan Charoensiri, who has been charged with sedition.

"I questioned whether the use of force was necessary and thought of ways to defend him," she said. "One of the senior volunteers suggested that I study law."

When she arrived back in Bangkok, she chose Thammasat University's law faculty as her first preference.

During her university years, Ms Sirikan showed particular interest in criminal and public law as well as human rights. Her classes only lightly touched on the latter issue, but an internship with the International Commission of Jurists enabled her to travel with foreign law experts to document human rights abuses in the southernmost provinces.

In 2012, she obtained a World Bank Joint Japan Scholarship to study for a master's degree in international human rights law at the University of Essex in England. She returned a year later to work as a legal consultant with the ICJ, where she co-wrote a report on Somchai Neelapaijit and enforced disappearances in Thailand.

A month after the report was launched in March 2014, Ms Sirikan started working on the mysterious disappearance of Karen land rights activist Porlachee "Billy" Rakchongcharoen.

Then there was the May 2014 coup, which prompted Ms Sirikan and over a dozen other lawyers to form Thai Lawyers for Human Rights on May 24. It initially started out as a hotline operating in a small office.

"When martial law was announced, we knew people would be arrested, and we wanted to ensure they had access to justice," Ms Sirikan said.

The group later received funding from the European Union to set up a new office at Saphan Khwai, and it now has over 20 full-time staff. It now receives all its funding from international donors including the EU, Germany and US-based human rights organisations and embassies of the UK and Canada.

While Ms Sirikan worked behind the scenes as a legal and documentation specialist, providing information on international law to her colleagues, she took on her first court case by representing 14 student activists who carried out peaceful protests calling for democracy and an end to military rule last June.

Following her refusal to allow authorities to search her car and after filing a complaint against the police for abuse of authority, Ms Sirikan was charged with two offences under the criminal code for refusing to comply with the order of an official and filing a false complaint.

On Sept 20 she received another summons from police while she was attending a session of the UN's Human Rights Council in Geneva, where she conducted advocacy on the human rights situation in Thailand. When she reported to the police on Oct 22, she was informed that she was being charged for being an accomplice in a coup commemoration organised by her clients.

Officers cited evidence of her carrying a plastic bag and brown envelope while rushing to her car, while a photo of her on the day of the commemoration showed that she was allegedly involved in her clients' activities.

Ms Sirikan is accused of sedition and violating the junta's ban on political gatherings. If found guilty, she could face up to seven years in prison. Following the accusations, 10 international organisations signed a statement calling on the government to immediately drop all proceedings against Ms Sirikan.

"The fact that the authorities have made these accusations more than one year after TLHR's clients were charged with sedition in the same case suggests the accusations have been made in retaliation for her high-profile national and international human rights advocacy since the military coup," said ICJ secretary-general Wilder Tayler.

Ms Sirikan denied all charges, saying she was present during the coup commemoration event to offer legal assistance to her clients. "It's pretty much clear that this is judicial harassment," she said.

If ultimately indicted, Ms Sirikan could face trial in a military court as the charges predate a junta order last month phasing out the prosecution of civilians in military court.

The order does not apply to pending civilian cases or those committed before Sept 12, with about 517 people currently being tried under military courts.

The junta has been using the law not only against human rights defenders but also lawyers. Last November, lawyer Benjarat Meetian filed a complaint against police and the junta-led National Council for Peace and Order's legal team for mistakenly accusing her client -- who is still in jail -- of being one of nine suspects in a terrorist plot involving the Bike for Dad cycling event on Dec 11 last year.

Weeks later, Ms Benjarat faced a criminal defamation suit filed by the NCPO's law office. The NCPO has dropped the case but the police have filed a separate charge.

Schoochart Kanpai was also threatened with a criminal defamation suit after he told reporters that his client had been tortured into admitting that he was involved in the Erawan shrine blast last year. The government has rejected allegations of torture.

"The government has a role to check [the allegations], not to accuse the statements of being defamatory," said Ms Sirikan.

So far, the TLHR has provided assistance in 101 cases, including two involving its documentation staff.

"Instead of devoting our time to help others, we have to allocate some of our resources to help our own staff who are faced with charges," Ms Sirikan said. "But I'm not discouraged. If I give up the principles that I have been advocating, what will my clients think of me? Who will help protect them?" 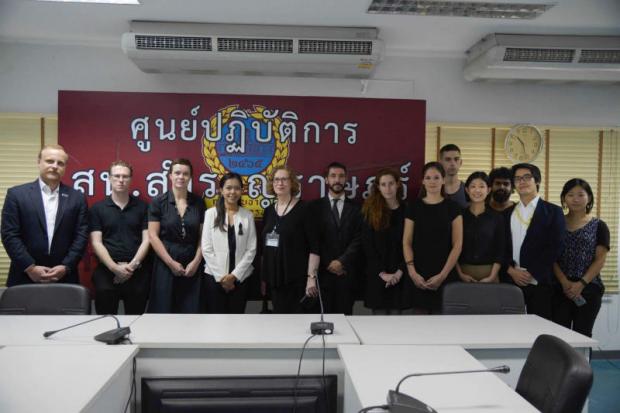 FAITH IN THE LAW: The 2014 coup prompted Ms Sirikan and other lawyers to form Thai Lawyers for Human Rights.