Entertainment activities and normal TV programming can resume from Nov 14, following a month of national mourning for His Majesty the late King, the government declared Tuesday.

However, speaking after the weekly cabinet meeting, Prime Minister Prayut Chan-o-cha said the government expected cooperation from TV hosts and operators of entertainment venues to avoid activities that could be interpreted as "uproarious or wild".

More polite language should be used on TV entertainment shows that will resume on Nov 14, Gen Prayut said, stressing that this was a request for cooperation, not an order.

For documenting how Thais people -- at home and abroad -- mourn the death of His Majesty, Gen Prayut said he had ordered a government team to compile photos capturing daily mourning scenes into a photo book.

Assistant Bangkok governor spokeswoman Thaksada Sangkhachan said flags will no longer be flown at half mast from Nov 14.

One of Bangkok's best-known tourist attractions, Wat Phra Kaeo was closed to tourists following the passing of His Majesty.

A large number of tourists, although not as many as usual, visited the temple Tuesday. Many dressed in dark-coloured clothing.

Visitors are now allowed to go sightseeing at the temple from 8.30am until 3pm through the Wiset Chai Si gate of the Grand Palace.

Below: Foreign tourists take photos of Wat Phra Kaeo after the Royal Household Bureau began allowing them to visit the temple inside the Grand Palace. (Photo by Krit Promsakha na Sakon Nakhon) 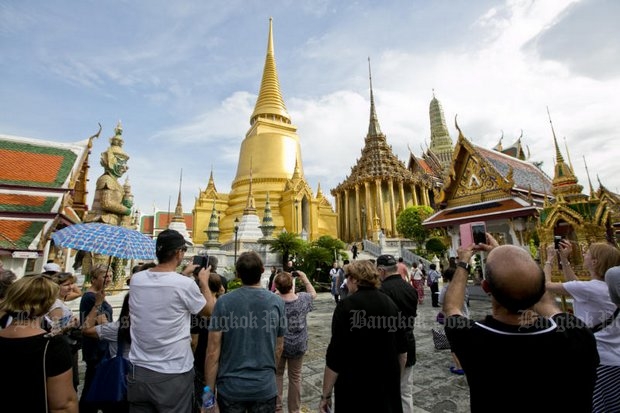 The Industry Ministry has asked 68,757 factories to reduce their production capacity temporarily in order to tackle smog.

The Energy Ministry is preparing to adopt food traceability technology by June to prove that crude palm oil is locally produced and prevent smuggling from neighbouring countries, aiming to deal with the huge annual surplus.

Suvarnabhumi airport is on track to experience the first commercial 5G in Thailand by May, according to the National Broadcasting and Telecommunications Commission (NBTC).