Prime Minister Prayut Chan-o-cha has called an urgent meeting with the National Rice Policy Committee to draw up relief measures for rice farmers before a new supply of grains hits the market this month.

The meeting was promptly called following a report that a farmer in Phichit committed suicide by hanging himself due to falling rice prices, a ministry source said.

Teerapat Prayurasiddhi, Agriculture and Cooperatives Ministry permanent secretary, said Gen Prayut, who chairs the committee, is concerned about rice prices and wants to ensure that aid measures will be implemented in a comprehensive manner. 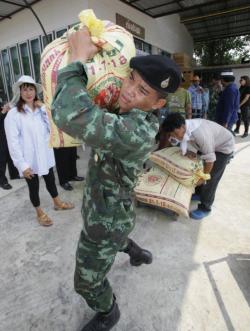 HELPING HANDS: A soldier carries rice sold by Nong Chok farmers to a military unit in Prachin Buri, while ex-PM Yingluck Shinawatra sells her rice at a store on Ram Intra Road.

He said the meeting, scheduled for tomorrow, will focus on white rice prices and the annual rice harvest that begins this month. The meeting will also follow up on the implementation of the fresh subsidy programme.

The move comes a week after the cabinet resolved to launch a subsidy programme to help farmers suffering a slump in rice prices.

Under the scheme, farmers will receive 13,000 baht per tonne for Hom Mali paddy.

Of the 13,000 baht, 9,500 baht will be paid to farmers to store their paddy for a certain period of time, while the rest of the subsidy covers other costs including quality maintenance and storage.

A source at the Agriculture and Agricultural Cooperatives Ministry said the meeting was prompted by the death of a Phichit rice farmer who allegedly committed suicide due to stress over heavy debts.

Supakit Punplaek, 43, a resident of tambon Wang Samrong in Bang Mun Nak district, was found hanged in his rice field on Friday morning.

According to the source, the prime minister is very concerned about the situation because rice from the most recent harvest will be released soon. Without good preparation, a new supply could further drive down prices.

Government spokesman Sansern Kaewkamnerd yesterday sympathised with Supakit's family but played down a connection between the death and rice prices.

He said provincial authorities paid a visit to Supakit's family and offered condolences and were ready to provide assistance. 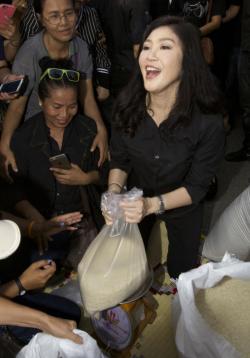 However, Lt Gen Sansern said Supakit made a living fixing air conditioners and grew rice as a second job.

The spokesman declined to respond to Pheu Thai politicians' criticism of the government's handling of the rice price fall, saying Gen Prayut urged restraint to avoid friction and told concerned authorities to focus on addressing the problems.

Agriculture Minister Chatchai Sarikulya has ordered authorities to inspect rice production in 28 key provinces and come up with estimates on the supply of the current harvest, the source said.

Ms Yingluck, accompanied by key Pheu Thai members, brought 10 tonnes of rice she had purchased from farmers during her visit to a northeastern province for distribution at a shopping mall in Bangkok.

Ms Yingluck had brought 10 tonnes of grain and sold them at 20 baht a kilogramme, the same price at which she bought them from the growers.