In Samut Prakan, the old Sukhumvit Road between Chang Sam Sian and Pu Chao Saming Phrai intersections, especially in front of a PTT petrol station, was heavily flooded. (continues below) 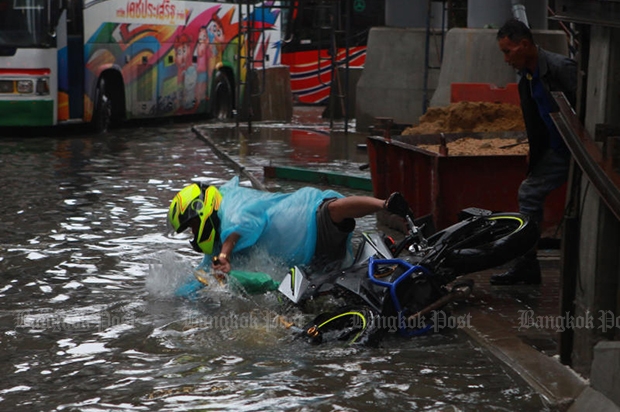 A motorcyclist loses his  balance and takes a swim in Pu Chao Saming Phrai area. (Photo by Somchai Poomlard)

Cars heading for Samut Prakan town were moving at a snail's pace along kilometre-long section of Si Nakarin Road from Soi Bearing to Soi Lasalle.

At 11.36am Tuesday, a tweet by JS100 traffic radio showed the road at Pu Chao Saming Phrai intersection was still flooded.

In Nonthaburi, Muang Thong 2 Housing Estate in Phatthanakan area was 30-40 centimetres under water.

Soldiers from the provincial peace-keeping force brought in army trucks to ferry residents between the housing estate and the main road so they could get to their jobs.

In Nakhon Pathom, many low-lying spots in the provincial town were inundated, especially around the Phra Pathom Chedi and behind Rachinee Burana School.

Phetkasem and Ratchawithee roads were also flooded, making it difficult for students to travel to school.

Ekaphan Kuptawat, the Nakhon Pathom Municipality mayor, said water pumps had been installed at various low-lying areas in advance following a warning from the Meteorological Department.  He believed the floodwater would be pumped out of the inner part of the town in two or three hours.

Royol Chitradon, director of the Hydro and Agro Informatics Institute, said Bangkokians would also have to deal with heavy rain on Tuesday evening or into the night due to the influence of a low pressure system over Leam Yuan, or Ca Mau Pennisula, in Vietnam and the Andaman Sea.

Bangkok governor Aswin Kwanmuang has ordered all district offices to prepare for further flooding. Water pumps were on  standby for use where needed, he said. 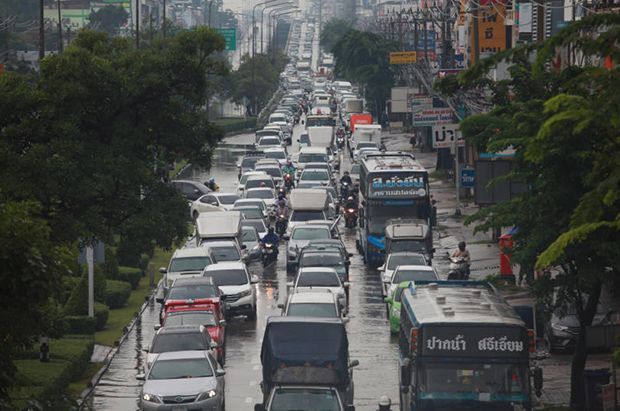 A long line of slowly moving traffic on a flooded road in Samut Prakan. (Photo by Somchai Poomlard)