A demolition notice is posted on one of three small resorts on Phu Thap Boek in Lom Kao district in Phetchabun on Oct 30, 2016 ordering the owners to remove the buildings by Nov 13. (Photo by Sunthorn Kongwarakom)

PHETCHABUN - Three more illegal resorts are being targeted for demolition on popular Phu Thap Boek mountain as the deadline for their removal nears and the owners have still not complied.

Phetchabun governor Pibul Hattaki่jkoson convened a meeting on Friday to discuss the demolition of three more resorts on the scenic mountain in Lom Kao district whose owners have already been issued an order to remove them.

The deadline falls due on Sunday. Provincial authorities will begin removing them on Nov 20 if they ignore the order.

Two of them, Ava Phu Thap Boek and Small Ville, have agreed to comply with the removal order, but Ban Phu Sai Mok remains defiant, the governor said.

So far, 19 resorts have been torn down -- two of them by the owners and 17 by the authorities. Owners of illegal tourist accommodations who leave it to officials remove their property will soon receive the bill from the province. The total demolition bill for the 17 small hotels is 2.35 million baht.

The demolition process is being hurried up, with 64 more illegal resorts already on the eviction list.

Lom Kao district chief Somluck Yoknoiwong said authorities will explain to owners of the 64 resorts the need to comply with the order, or be forced to shut down their business. (continues below) 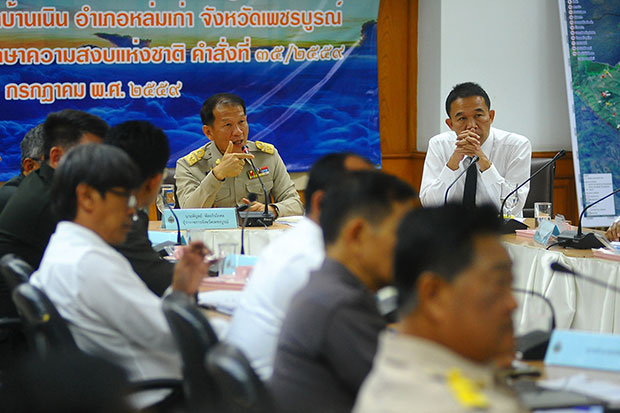 The clampdown of the resorts at Phu Thap Boek is under an order issued by the National Council for Peace and Order in July, and follows rapid environmental degradation and the misuse of land reserved for the Hmong to continue their farming way of life. Many of them instead leased their land to outsiders, who quickly built unauthorised resorts for the many visitors to the mountain.

The stunning scenic view and cabbage farming on the mountain has drawn tourists to Phu Thap Boek since it was featured in several movies and TV series. It is also promoted on the website of the Tourism Authority of Thailand.

PARIS: Using higher doses of antibiotics in a bid to tackle the growing problem of drug resistance may end up strengthening certain bacteria, according to research released on Wednesday that highlights a previously unthought-of risk.

LONDON: Pep Guardiola's deft introduction of a new generation at Manchester City inspired their latest Premier League title triumph, laying the foundations for a burgeoning dynasty at the Etihad Stadium.

The government on Wednesday reported a record daily high of 34 Covid-19 related deaths, lifting the total to 486, along with 1,983 new infections, for a total caseload of 88,907 since the epidemic began early last year.