Ratchayothin flyover to have trial closure

The Ratchayothin intersection flyover, which is soon to be torn down, will be closed intermittently between Tuesday and Friday - and permanently on Saturday.

This week will be a trial to gauge the impact on traffic flow and finalise the best rerouting option to combat the expected congestion.

After the four-day trial, demolition of the flyover will start early Saturday to make way for the construction of the Green Line extension of the electric railway stretching from Mor Chit to Khu Khot in Pathum Thani. 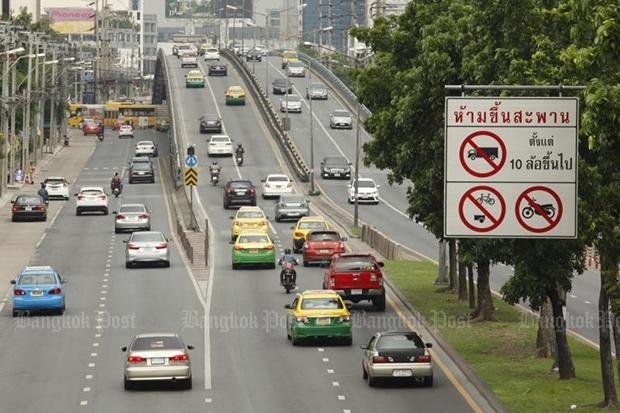 The Ratchayothin intersection flyover that will be closed from Tuesday. (Bangkok Post file photo)

According to the Mass Rapid Transit Authority of Thailand (MRTA), the flyover will become off-limits to all vehicles from 10am to 3pm on Tuesday and Wednesday and from 8am to 5pm on Thursday and Friday. Permanent closure will begin at 1am on Nov 26.

The trial closure is aimed at giving the MRTA and the Traffic Police Division time to test traffic diversion plans at the busy Ratchayothin intersection to see which one will work best and have the least impact on motorists using Ratchadaphisek Road and Phahon Yothin Road when demolition begins. Motorists and commuters have been urged to follow announcements and allow extra time when travelling through the area.

“When demolition begins, the area, which is already congested, will become more congested, and the congestion area will be bigger,” Pol Lt Gen Wittaya said.

He said traffic police would initially allow drivers on Ratchadaphisek Road and Phahon Yothin Road to go straight, turn right or turn left at the intersection as usual. If the plan failed to improve the congestion, drivers from all directions would not be allowed to turn right and would be required to make u-turns at designated spots. If the problem continued, all motorists would have to go straight only.

Pol Lt Gen Wittaya said authorities had created an additional lane on both the inbound and outbound Ratchadaphisek Road, increasing it from two to three lanes on each side, near the intersection. Three new u-turns have been opened near the Criminal Court, SCB Park Building and at the mouth of Phahon Yothin Soi 35.

Construction of a tunnel that will replace the flyover, as well as the Green Line extension, will take about two years to finish, according to authorities.

The new Green Line section, to be operated by Bangkok Transit System and Bangkok Metropolitan Administration, is part of the 18.4km northern extension linking Mor Chit, Saphan Mai and Kukot. 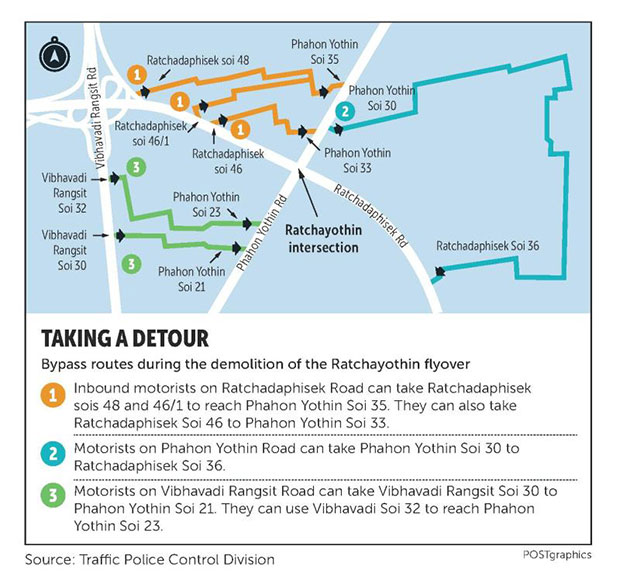