The wreckage of the tour bus in the ravine after it plunged off a winding hill road in Uttaradit's Muang district, killing 18 people and injuring 20 others, on Tuesday morning. The victims were retired employees of state-run CAT Telecom Plc on a holiday. (Photo by Boonnam Kerdkaew)

UTTARADIT - Eighteen people, all retired employees of CAT Telecom, were killed and 20 other people injured when a tour bus plunged off a hillside road and into a deep ravine in this lower northern province on Tuesday morning.

The tour bus, carrying 36 retired employees, the bus driver and a bus assistant, was travelling from Phrae to Bangkok when it ran off the winding downhill road on Khao Pueng mountain and into a 70-metre deep ravine at tambon Ban Dan Nakham in Muang district, said Pol Maj Ratchata Sroikaew, a duty officer at Muang police station. The accident was reported around 10.35am on Tuesday.

The bus, operated by state-run Transport Co, was hired to take the 36 retireees on a holiday in the North. The accident occurred on the way back to Bangkok.

Rescuers used ropes to lift the injured and dead from the wreckage.  Eighteen people were killed and 20 others, including the driver and his assistant, injured.

The driver, identified later as Udom Summart, 48, was believed to have jumped from the bus before it plunged off the road into the ravine, which was about 70 metres deep, said police.

Uttaradit governor Pipat Ekpapan and senior police rushed to the scene to command the rescue operation. More than 200 rescuers from several agencies worked throughout  the day to extract the victims from the wreckage and transport them to hospitals.

The operation finally ended at 5.25pm.

Mr Pipat said the tour bus was hired to take the CAT retirees from Bangkok to Phrae and Nan on Nov 19-22. The bus had left Phrae and was returning to Bangkok.

‘’Rescuers were working to their very best to help the victims. The operation was made difficult because the bus plunged to the bottom of a deep ravine.

"The bus has only one exit door. The rescue teams had to take extra cautions for fear the bus might roll on top of them. A military unit provided two cranes to anchor the bus and prevent it overturning,’’ the governor said.

Police would question in the bus driver as soon as he was well enough. He was being treated at Uttaradit Hospital, Mr Pipat said. 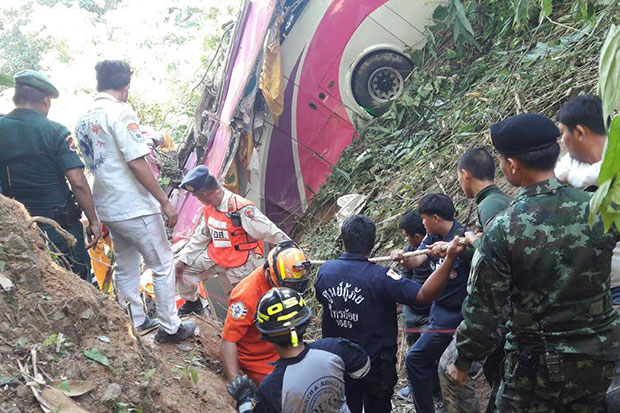 Rescuers retrieve victims from the scene of the crash in Uttaradit. (Photo by Boonnam Kerdkaew) 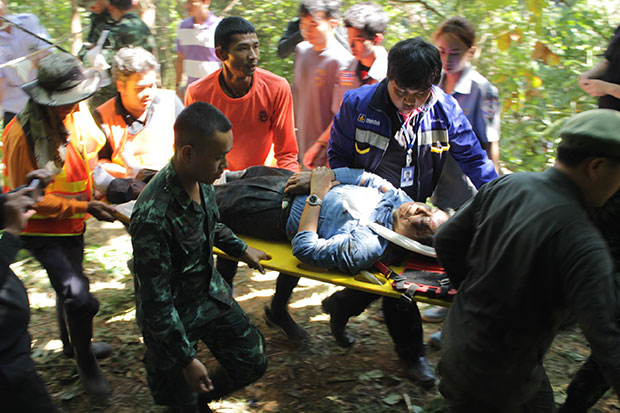 One of the injured passengers is carried from the crash scene to a hospital. (Photo by Boonnam Kerdkaew)