Muslims and Buddhists held a protest over the insurgents' attack on two women, one of them due to give birth next month, in Panarae district in Pattani on Sunday. (Photo by Adbulloh Benjakat)

PATTANI - About 200 people, both Buddhists and Muslims, rallied on Pattani-Narathiwat Road in tambon Khon of Panare district on Sunday in protest over the attack on two Buddhist women on Saturday night which left one, who was eight months pregnant, dead and the other injured.

The dead woman, identified as Rattakal Jawang, 26, was due to give birth to her baby late next month. Doctors tried to save the life of the foetus but failed.

The protesters raised banners and placards denounding the attack on innocent people. They called for an end to all forms of violence.

Their representatives said both Buddhist and Muslim people were deeply saddened by the incident and called for government authorities to step up measures to ensure their safety.

Also on Sunday, the Network of Buddhists for Peace issued a statement to condemn the killing of the pregnant woman and expressed condolences to her family.

The network called for government authorities to bring the culprits to justice and take remedial action to help the families of the two women.

Earlier on Sunday, Angkhana Neelapaijit, a National Human Rights Commission (NHRC) member and chairwoman of a subcommittee on women's rights, issued a statement to condemn the attack which took place during the time a campaign was being launched worldwide for an end to all forms of violence against women.

She said she would travel to the South to follow up the situation and visit the families of the two women.

There was little solace, then, from new statistics released on Sunday. 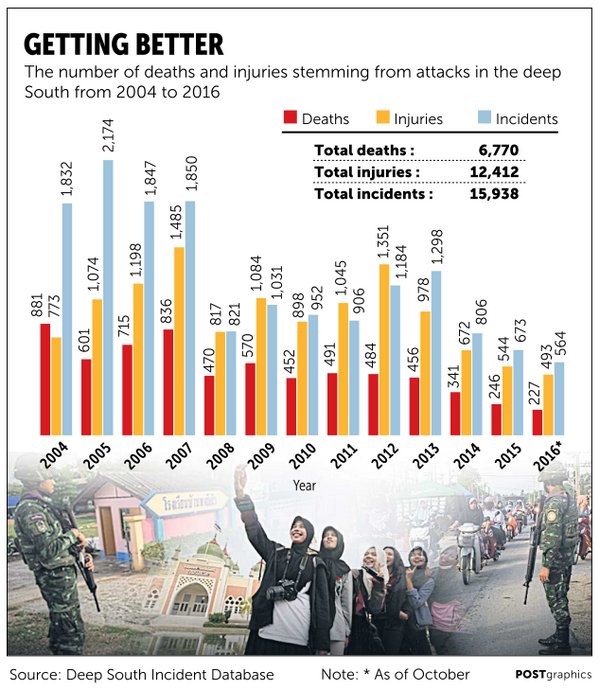