CHON BURI - Pattaya City Council was told on Tuesday the Marine Department was being too hasty in launching the proposed ferry service between Pattaya and Hua Hin, because the docking facilities would not be ready in time.

The opposition emerged a little more than two weeks after the department's director-general Sorasak Sansombat announced approval had been given for a private company to operate the Pattaya-Sattahip-Cha-am-Hua Hin ferry service.

It was scheduled to start on Jan 1 as a New Year gift for the public, Mr Sorasak said. Authorities were currently inspecting the firm’s readiness to provide the service, upgrading the ports and finalising fares.

However, at a meeting of the Pattaya City Council on Tuesday, some members criticised the project as being too hasty, and opposed the use of Laem Bali Hai pier in South Pattaya for the service.

The then-transport minister had set up a team that made an on-site survey in Pattaya and concluded that Laem Bali Hai pier was not suitable for use because of issues related to docking, safety, car parking space and accessibility, plus the impact on traffic in the area.

The team had proposed that the departure port be moved to Sattahip Commercial Port (also known as Jook Samet Port) under the navy’s supervision in Chon Buri’s Sattahip district.

“But in the end they announced publicly that they had still chosen Laem Bali Hai pier. So it’s like (the city) being forced to accept their decision on the venue.

“Pattaya City owns and supervises the pier and should consider the matter discreetly before giving its approval,” Mr Sinchai said.

Councillor Thanes Supparoshasrungsri said a ferry service across the Gulf of Thailand was a good idea but launching it as early as Jan 1 was too hasty and could lead to safety issues. He stressed that the South Pattaya pier was dilapidated due to past heavy use and would need a major overhaul.

“I still think it’s a good project, but this is not the right time yet. The current condition of the pier, which was built in 2003, is very run-down as it services about 10,000 commuters and tourists daily.

“The city council has just approved a 30 million baht budget for a major upgrade and repair of the pier. Problems may arise if larger vessels and more tourists start using it too soon,” Mr Thanes noted.

The city administrators agreed to review the Pattay-Hua Hin ferry scheme and to give their feedback to the Marine Department later.

The service would be initially limited to a daily round-trip, using a vessel with a maximum passenger capacity of 150 each trip and would cater only to passengers, not vehicles, according to Mr Sorasak. 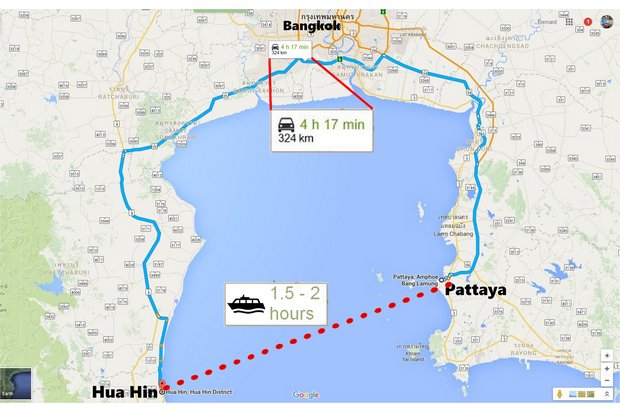