Set to fulfil his destiny

His Royal Highness Crown Prince Maha Vajiralongkorn was born on July 28, 1952, the only son of Their Majesties King Bhumibol Adulyadej and Queen Sirikit.

His birth at Amporn Palace was marked by traditional trumpet fanfare, the royal anthem, gun salutes from army and navy cannons and cheers from the eagerly awaiting crowds.

There had been no designated heir apparent in the kingdom since the reign of King Vajiravudh, King Rama VI, so it was a cause for celebration.

He received his early education with private tutors in the Udon Throne Hall at the Dusit Palace. When the royal family moved to Chitralada Villa, the Chitralada School was set up within the palace compound where he continued his education.

He furthered his education abroad, first in the United Kingdom at King's Mead School and Millfield School, and later in Australia where he attended The King's School in Sydney.

His formal education was followed by military training at the Royal Military College, Duntroon in Canberra, Australia, as well as various other higher military education institutes.

HRH Prince Vajiralongkorn became Crown Prince on Dec 28, 1972, upon his coming of age. The traditional investiture ceremony was held in the Ananta Samakhom Throne Hall.

The event included an oath-taking ceremony to honour and defend his title, to swear loyalty to the nation and the people, to carry out his duties and responsibilities to the best of his intellect, abilities and with selflessness, for the prosperity, happiness and stability of the country. 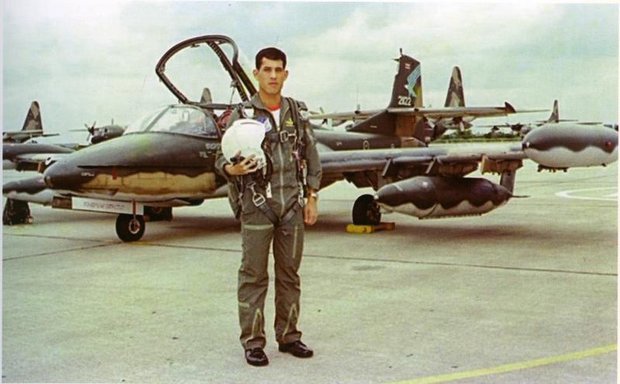 When His Royal Highness ascends the throne, he becomes the ex-officio head of the armed forces - the army, the navy and the air force - as stipulated by the constitution and royal traditions.

He has also undergone military training programmes with the Air Force Special Operations unit in Perth, Australia, as well as at Fort Bragg in the US. His pilot training also includes flying the SIAI-Marchetti SF260 MT, the Cessna T-37, and the Northrop F5 at Williams Air Force Base in the US.

He expanded his pilot experience to commercial aircraft, becoming a pilot of a Boeing 737-400 for Thai Airways International. He piloted his first flight in 2009, a charity flight to Chiang Mai to raise funds for flood victims and to buy medical equipment for hospitals in the three southernmost provinces of Thailand.

In keeping with tradition, the Crown Prince was ordained as a monk for a season in 1978 at Wat Phra Si Rattana Satsadaram in Bangkok.

In recent years, as His Majesty the late King Bhumibol Adulyadej took on fewer public engagements due to his health, the Crown Prince shouldered more responsibilities, attending to ceremonial duties.

In a speech he gave for the late King's birthday on Dec 5, 2009, during a Grand Audience at the Grand Palace, the Crown Prince reiterated his allegiance to the King and nation, proclaiming:

"On this most auspicious occasion, I would like to solemnly swear that I will carry out my responsibilities, both as a Thai and as a member of the Chakri Dynasty, to the best of my knowledge and abilities, in the best of faith and loyalty to Your Majesty and the nation forever."

INVESTITURE:
The inaugural ceremony for the bestowal of the title of His Royal Highness Crown Prince Maha Vajiralongkorn

When His Royal Highness Crown Prince Maha Vajiralongkorn was four days old, on August 1, 1952, His Majesty King Bhumibol Adulyadej wrote a royal request delivered to the Supreme Patriarch to arrange for matching the horoscope of His Royal Highness the new Prince of His Majesty King Bhumibol Adulyadej and the name to be established for the young prince.

Subsequently, His Majesty King Bhumibol Adulyadej graciously arranged a celebration for His Royal Highness the Prince for two days on September 14 and 15, 1952 at Amphorn Satharn Villa, Dusit Palace.

On Sept 14, 1952 at 4.30 pm., His Majesty King Bhumibol Adulyadej and Her Majesty Queen Sirikit went to the ceremonial room to light candles and incense paying homage to the Buddha Refuge, the monks then chanted Buddhist mantras, offered special blessings and left.

On Sept 15, 1952, at 8 am., His Majesty King Bhumibol Adulyadej and Her Majesty Queen Sirikit went to the ceremonial room, and graciously arranged for a month of celebration for His Royal Highness the Prince according to the Kattii royal tradition, with members of the Royal Family and officials in the royal service to join a triple circumambulation in celebration. 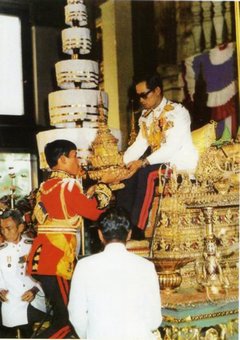 In 1972, on December 28, His Majesty King Bhumibol Adulyadej graciously arranged an inauguration ceremony for the bestowal of the title of His Royal Highness Crown Prince Maha Vajiralongkorn, at Ananda Samakhom Throne Hall, Dusit palace.

One excerpt from the royal command to establish the title of His Royal Highness Crown Prince Maha Vajiralongkorn, reads:

As stated in the bliss or the royal statutes of the country, when a Royal Prince who is destined to be heir to the throne is mature, the King shall graciously bestow the rank upon him of Somdet Phra Yuphorot Mokutrotchokumon.

At this present time, all people including citizens of notions all over the world shall accept and acclaim that His Royal Highness Prince Vajiralongkorn shall to succeed to the throne of the Kingdom. When His Royal Highness Prince is mature, at the time that he shall be established as heir to the throne, tradition and a royal tradition Kattii ceremony should be observed, consistent with the citizens and all leaders of the country of all sides.