Taking a boat trip along the Chao Phraya River is one of most popular activities for foreign visitors to Bangkok. (Bangkok Post file photo)

Bangkok is the most affordable destination for people living in Southeast Asia planning a week-long foreign holiday during the months of December to February, according to a survey by travel site TripAdvisor of 10 top destinations.

The company on Thursday revealed its top 10 most popular destinations for travellers within the region during the travel period of Dec 1 to Feb 28 2017, along with average one-week costs for hotels, airfare, meals and attractions.

It found that the average cost of a one-week trip to Bangkok from elsewhere in Southeast Asia was 43,451 baht, the lowest of the top 10 destinations. The calculated cost covers a seven-night hotel stay, average round-trip airfare, two tours/activities and three restaurant meals per day.

Janice Lee Fang, communications director for TripAdvisor, Asia Pacific, said Bali emerged as the most popular destination in terms of traveller interest for Southeast Asian travellers looking to take a holiday in the New Year, followed by Luzon in the Philippines, Hong Kong and Bangkok.

“This report comes in handy for travellers who are planning breaks in the New Year, be it for Chinese New Year or Valentine’s Day,” she said.

The company said its seasonal report helped travellers take advantage of savings at the destinations by highlighting the least expensive week to visit, as well as highly rated value hotels and must-do bookable tours. 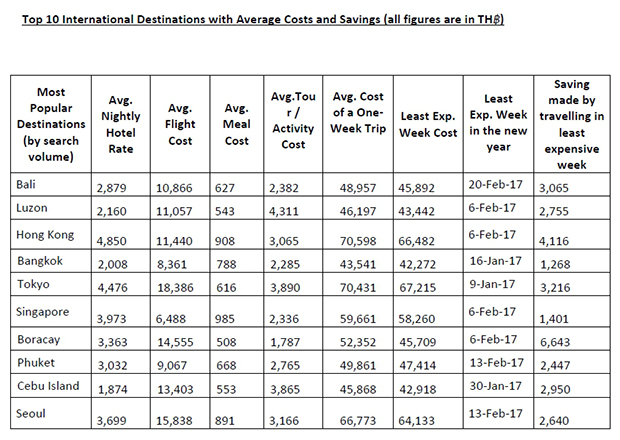 At least one person was killed and tens of thousands fled their homes as Super Typhoon Surigae made a close approach to the Philippines’ eastern provinces.