The Kingdom has a new King after His Royal Highness Crown Prince Maha Vajiralongkorn on Thursday accepted an invitation to ascend the throne from the National Legislative Assembly president.

His Royal Highness said: “I accept [the invitation to be king] and to fulfil the royal intentions [of the late King] for the benefit and happiness of all Thais.”

Prime Minister Prayut Chan-o-cha announced the completion of the formalities on the TV pool.

“Thailand now has a new King,” he said. 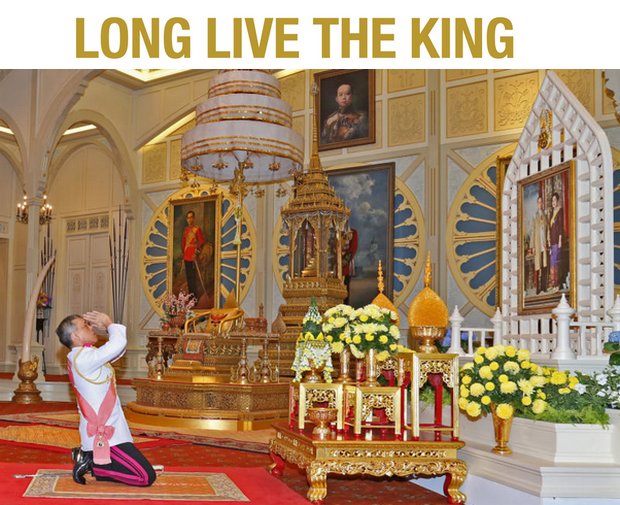 His Majesty King Maha Vajiralongkorn Bodindradebayavarangkun pays respects before a portrait of the His Majesty the late King Bhumibol Adulyadej and Her Majesty Queen Sirikit after formally accepting the invitation to accede to the throne as the 10th King of the Chakri dynasty last night. (Photo courtesy Royal Household Bureau)

The new King was formally named His Majesty King Maha Vajiralongkorn Bodindradebayavarangkun, according to the Office of His Majesty's Principal Private Secretary.

The title came after the Crown Prince accepted the invitation of the National Legislative Assembly (NLA) president Pornpetch Wichitcholchai and acceded to the throne as the 10th King of the Chakri dynasty Thursday night.

His Majesty's acceptance of the invitation was made in accordance with the Palace Rule on Royal Succession 1924 and under the present interim constitution, according to the office's letter sent to the Public Relations Department director-general Thursday.

Pending the coronation, His Majesty is to be named in Thai as Somdet Phra Chao Yoohua Maha Vajiralongkorn Bodindradebayavarangkun.

When King Bhumibol Adulyadej passed away on Oct 13, the royal succession process began.

Gen Prem Tinsulanonda, who serves as the regent, led the heads of the country's three branches of government for an audience with HRH Crown Prince Maha Vajiralongkorn on Thursday afternoon to invite him to ascend the throne as the new King. 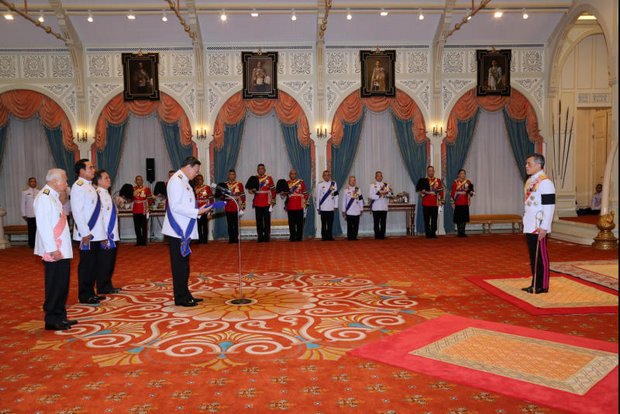 The new King accepts the invitation from the parliament president to become monarch. The regent and prime minister (left and second left) attend the ceremony.

Regarding portraits and pictures of His Majesty the late King decorating Ratchadamnoen Avenue and government buildings, Mr Wissanu said nothing would change now the new King has been proclaimed.

He also said the public can still wear black as a gesture of mourning for the late King.

However, the government will discuss and issue announcements on how to proceed after the new King ascends the throne, he said.

As Crown Prince before acceding, the new King presided over a royal merit-making ceremony Thursday to mark the 50th day since the passing of His Majesty the late King Bhumibol Adulyadej at the Dusit Maha Prasat Throne Hall inside the Grand Palace.

He was accompanied by other members of the royal family. 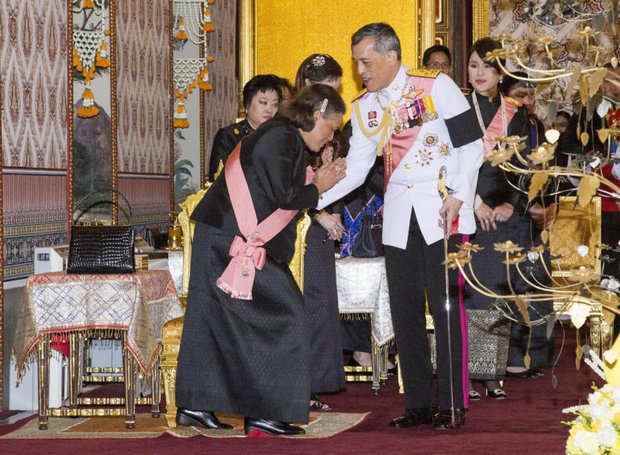 HRH Crown Prince Maha Vajiralongkorn receiveก a wai from Her Royal Highness Princess Maha Chakri Sirindhorn during a ceremony marking 50 days since the passing of the King at the Grand Palace.

Other merit-making ceremonies were also held nationwide to mark the 50th day since the passing of the late King.

Prime Minister Prayut and his wife led members of the cabinet and government officials Thursday morning in merit-making in front of Government House to mark the 50th-day event.

Gen Prayut then led cabinet members and government officials to give alms to the monks. A similar ceremony was held in front of the office of the Bangkok Metropolitan Administration, where governor Aswin Kwanmuang led city officials and members of the city and district councils in alms-giving.

A merit-making and alms-giving ceremony was also held at the Criminal Court on Ratchadaphisek Road, attended by Mr Veerapol, along with more than 1,500 judges and court personnel.

They also sang the Royal Anthem in honour of the late King.

At the government complex on Chaeng Watthana Road, Attorney-General Pongniwat Yuthapanboriparn led executives and personnel of the Office of the Attorney-General to perform a merit-making rite and gave alms to monks.

Meanwhile, a clean-up is getting under way at Sanam Luang, and areas around the Grand Palace after more than a month during which crowds of people have come to pay their respects to the late King in the Grand Palace. City Hall began the clean-up at 9pm on Wednesday and it is scheduled to end today.

In Chai Nat province, provincial governor Nimit Wanchaithanawong led local officials, and residents to pay their respects before the portrait of His Majesty the late King and offering alms to 89 monks to mark the event.

The late King visited this central province three times in the past.

A total of 89 men were to be ordained as monks Thursday as a tribute to the King Bhumibol.

Nipawan Kaewrakmook, secretary-general of the Thai Journalists Association, said the association, and other media professional organisations will join the Thai Red Cross Society to hold a blood donation event on Jan 25 to mark the 100th day since the passing of the late King.

Below: Shortly before accepting to become the King, HRH Crown Prince Maha Vajiralongkorn, along with His Royal Highness Prince Dhipankara Rasmijoti, at the Grand Palace. 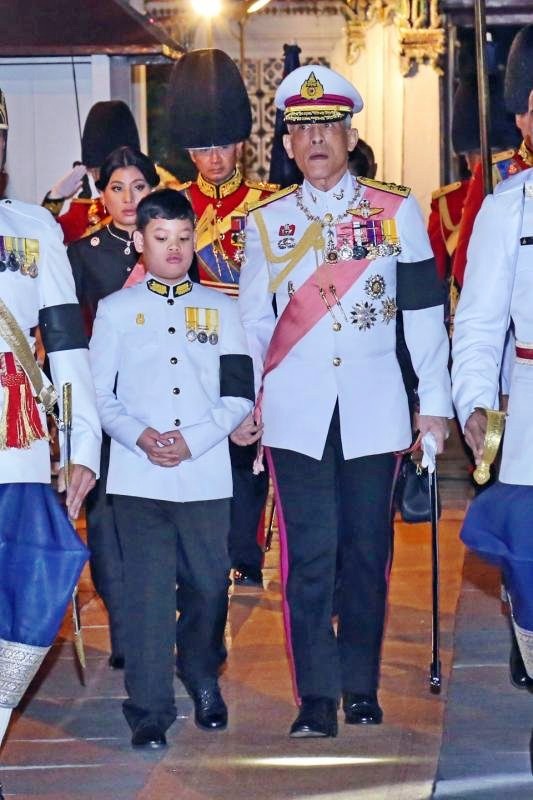 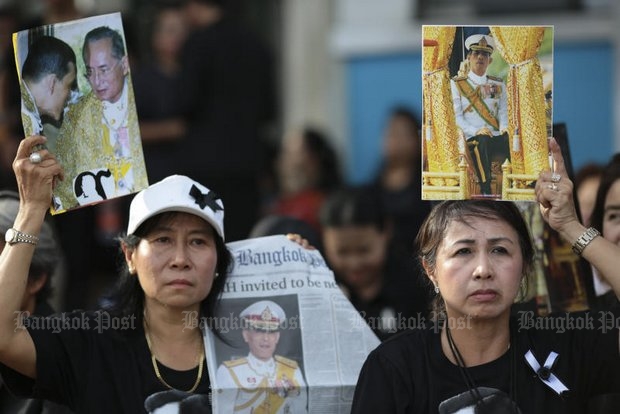 Royal devotees wait outside the Grand Palace with portraits of His Majesty the King and King Bhumibol Adulyadej on Thursday. (Photo by Patipat Janthong)