Police are expected to take legal action against anyone in charge of Wat Phra Dhammakaya for allegedly sheltering Phra Dhammajayo if the latter turns out to be staying at the temple and fails to report to authorities on money laundering and encroachment charges.

However, deputy national police chief Srivara Ransibrahmanakul admitted Thursday it was unclear who the incumbent acting abbot was, adding to doubts over Phra Dhammajayo's whereabouts.

The embattled monk's disciples have said poor health has prevented him from reporting to authorities. 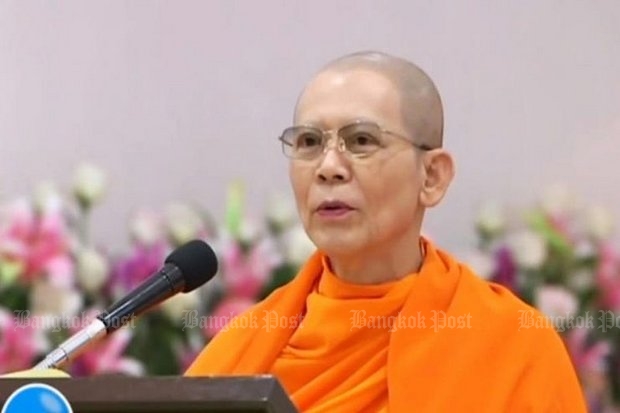 The temple has said the former abbot remained at the temple in Pathum Thani's Khlong Luang district, although senior temple figures have since conceded they have not seen him for some time.

Police have threatened legal action against those colluding to hide the monk.

Pol Gen Srivara said the National Office of Buddhism (NOB) should be able to tell who replaced Phra Dhammajayo as head of the temple.

Authorities had given Phra Dhammajayo until today to acknowledge charges in connection with alleged encroachment by the temple's World Peace Valley Meditation Centre at Khao Yai National Park in Nakhon Ratchasima's Pak Chong district, following a warrant for his arrest issued by the Sikhiu Provincial Court.

The deadline for the former abbot to report to the Department of Special Investigation (DSI) on charges of money laundering and receiving property in connection with the multi-billion-baht Klongchan Credit Union Cooperative embezzlement scandal expired on Wednesday.

Pol Gen Srivara and DSI officials discussed possible actions against Phra Dhammajayo if he fails to present himself to authorities. The meeting agreed the NOB would contact Phra Dhammajayo and convince him to surrender, he said.

The NOB will send a team of negotiators to talk to Phra Dhammajayo, DSI chief Paisit Wongmuang said Thursday.

The team has until Dec 10 to finish the job. However, Pol Gen Srivara said police stood firm that if Phra Dhammajayo does not report to authorities today, and if it turns out he is residing at the temple, anyone in charge, presumably the acting abbot, will face legal charges.

Police must prove whether Phra Dhammajayo is actually in the temple. If he is not and police obtained a warrant from the court to search the temple it would tantamount to perjury, he said.

Pol Gen Srivara said police and DSI intelligence reports failed to confirm if Phra Dhammajayo was in the temple.

Two cars believed to belong to the DSI were spotted near the temple gates Thursday. The department officials were there for an unrelated matter, according to Phra Maha Nopporn Punyajayo, assistant director of Wat Phra Dhammakaya's communications team.

The temple last night organised a religious ceremony to produce holy water and provide offerings to 999 monks in Pathum Thani.

A large number of worshippers in Pathum Thani and neighbouring provinces were expected to take part in the event, Phra Maha Nopporn said.

Asked if temple supporters were being used as a human shield to protect Phra Dhammajayo, Pol Gen Srivara vowed that those hindering the investigation would be arrested.

According to the prosecutors, the three are accused of luring 28 victims into making fake loan contracts worth 11.8 million baht and reporting a false financial statement to cover up KCUC's losses during 2008 and 2011.