Heavy floods continued to wreak havoc in 10 southern provinces, claiming at least 11 lives since the beginning of the disaster on Thursday, the Department of Disaster Prevention and Mitigation (DDPM) says.

The number of fatalities rose to 11 Sunday as two people remain missing and another were two were injured after being swept away in the floods in Surat Thani, said Chatchai Phromlert, director-general of the DDPM.

Of the 11 deaths, two were reported in Surat Thani, three in Nakhon Si Thammarat, two in Songkhla, two in Phatthalung and the other two in Pattani, he said.

The other provinces affected by flooding are Chumphon, Krabi, Trang, Yala and Narathiwat. Altogether, more than 366,000 people in 68 districts of the 11 provinces were affected by the floods.

The government was closely monitoring the southern flood situation and speeding up relief operations. Train services are being routed around flooded areas. 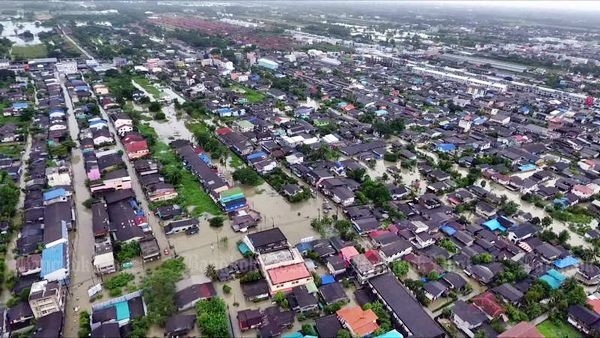 Another view from the drone shows the residential area of Nakhon Si Thammarat.

The PM also ordered fast-deployment teams equipped with disaster relief equipment to be sent out to assist flood victims around the clock, Lt Gen Sansern added.

Authorities were surveying areas prone to mudslides and implementing measures to prevent disasters, he said.

Residents and fishing trawler operators in the South were advised to closely monitor the flood and weather updates, he said.

If residents need extra assistance, they can contact the nearest flood-relief centre or call the hotline, 1784.

Heavy rain has reportedly covered about 80% of the South. In Nakhon Si Thammarat, the flood has submerged many parts of at least 18 districts affecting 1,245 villages.

In the Nakhon Si Thammarat municipality area, 36 communities were flooded forcing residents to be evacuated to temporary shelters. About 260 households in a remote community in the Sichon district were cut off from the outside world after the only bridge linking it to other areas collapsed as the canal became torrential.

Villagers had tried to help themselves by building a makeshift bridge to make their main commuting route passable again while a combined government team worked to repair the bridge.

Heavy rain has been lashing Krabi for three days, prompting the evacuation of residents in two villages in tambon Sin Poon in Khao Phanom district where the excess water in a reservoir rose rapidly and topped its crest, flooding several roads in the villages.