A locomotive gets stuck on the southern track between Phatthalung's Khuan Khanun district and Nakhon Si Thammarat's Cha-Uat district on Monday. (State Railway of Thailand photo)

All trains to the southern region have stopped at Thung Song junction station in Nakhon Si Thammarat after heavy flooding damaged tracks.

Trains on the southern line cannot go beyond Thung Song at least until Tuesday and the State Railway of Thailand has provided buses from the station to transport passengers to their destinations.

The services affected by the floods includes all express and rapid trains from Bangkok to Trang, Nakhon Si Thammarat, Hat Yai, Yala and Sungai Kolok in Narathiwat, as well as all local services from Thung Song.

SRT governor Wutthichart Kalayanamitr, who announced the decision on Monday, expected the disruption would continue on Tuesday as heavy rain and flooding were still ravaging the southern region.

The SRT decided to suspend services from Thung Song due to the flooding situation and a concern about the safety of passengers due to the damaged tracks, he added. 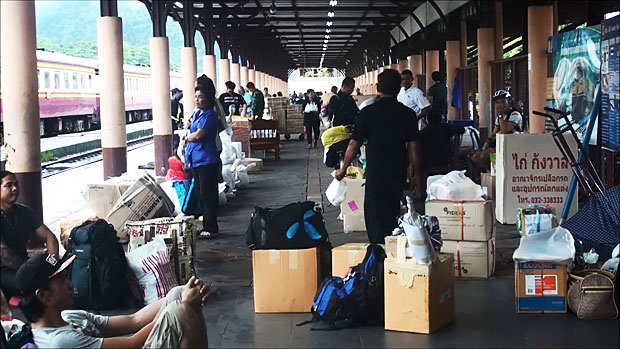