A locomotive was stuck Monday on a southern track between Phatthalung's Khuan Khanun district and Nakhon Si Thammarat's Cha-Uat, as parts of the track were submerged under floodwater, triggered by heavy rains in the South. (Photos courtesy State Railway of Thailand)

Households and businesses in the South have been hit hard by flooding while all train services heading to the lower part of the region are suspended after tracks were damaged by floodwater.

At least 12 provinces in the South have been affected by flooding which began last Thursday. The provinces are Chumphon, Surat Thani, Nakhon Si Thammarat, Phatthalung, Songkhla, Pattani, Yala, Narathiwat, Phuket, Krabi, Trang and Satun, with tens of thousands of residents affected. According to authorities, at least 11 people have been killed in the flooding.

The State Railway of Thailand (SRT) announced Monday it has temporarily halted the operation of the new Thaksinarat Special Express Train No. 31/32, running from Bangkok to Hat Yai in Songkhla. The move came after several southern railway tracks subsided when the areas were submerged under floodwater, said SRT governor Wuthichart Kalyanamitra.

Mr Wuthichart said trains on the southern line cannot go beyond Thung Song station and the SRT is providing buses from the station to take passengers to their destinations.

The services affected by the floods include all express and rapid trains from Bangkok to Trang, Nakhon Si Thammarat, Hat Yai, Yala and Sungai Kolok in Narathiwat, as well as all local services from Thung Song.

The SRT decided to suspend services from Thung Song due to the flooding situation and concerns about the safety of passengers. 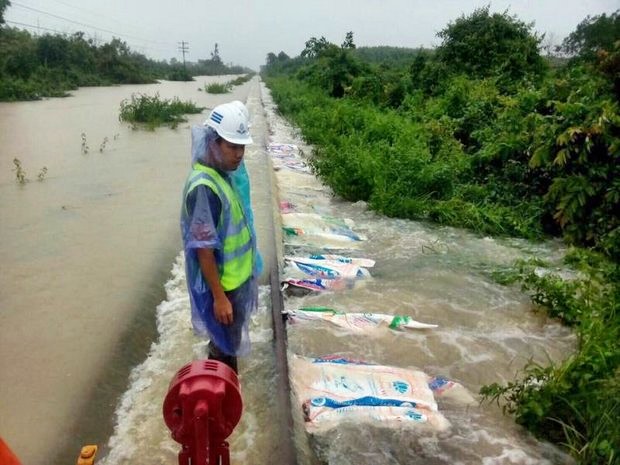 According to the Thai Meteorological Department, an active low pressure zone remains over Sumatra and a strong northeast monsoon across the Gulf and the South of Thailand led to torrential rain over much of Prachuap Khiri Khan, Chumphon, Surat Thani, Nakhon Si Thammarat, Phatthalung, Songkhla, Ranong, Phangnga, Phuket and Krabi.

"People should beware of severe weather and possible flash floods, and all transport should proceed with caution," it said.

Soldiers will work closely with local administrative officials to help evacuate villagers to safe areas, build sandbag walls and provide maintenance to public properties damaged by floods as well as give away flood-relief bags to flood victims.

In Nakhon Si Thammarat, five people have died and over 260,000 residents in 161 tambons of 23 districts have been affected by floodwater, provincial governor Jamreon Thippayapongthada said.

In Nakhon Si Thammarat municipality, mayor Chaowawat Saenpong said floodwater levels in the city have rapidly increased due to high seawater levels and flash floods from the mountains, even though water pumps are working to help discharge water.

In Surat Thani, more than 87,000 villagers were affected by floodwater while 16 out of 19 districts were declared flood-affected zones.

On Koh Phangan, electricity was cut off after a landslide caused by heavy rain knocked down four electricity poles, obstructing traffic on the island.

A backhoe was deployed to remove the poles. Several roads on Koh Samui also were submerged under floodwater.

Water levels between Ban Dara Hotel and Bo Put junction stood at 30 centimetres, one metre in front of Wat Bo Put, 50cm at Samui Town Centre, and 1.50 metres in front of the Big C on the island.