Floods cover most of the South
Thailand
General

Floods cover most of the South

Much of the municipal area of Nakhon Si Thammarat was flooded on Tuesday. (Photo by Nujaree Raekrun)

Major flooding continued in 12 of the 14 southern provinces on Tuesday, with about 94,000 people severely affected and Trang suffering its worst inundation in 30 years.

Fourth Army chief Piyawat Nakwanich said an estimated 90,440 people were affected in 1,071 villages. "People are in trouble, with many places isolated," he said.

Authorities would be helping the victims until the situation returned to normal, Lt Gen Piyawat said.

Floodwater was receding in Kong Ra, Pa Bon and Tamot districts of Phatthalung, while runoff was still flooding into districts around Songkhla Lake, he said.

Deputy Prime Minister Narong Pipatanasai said on Tuesday that Trang province was suffering under the most severe flooding in about 30 years.

"The problem results from the construction of roads without channels to carry runoff from Surat Thani. As a result, the  floodwater rose one metre overnight," Adm Narong said. It would probably be 3-4 days before the floods receded in Trang.

In Chumphon, a 200-metre-long section of Asian Highway No. 41, a main highway to the South, covered in water 20-40 centimetres deep. Traffic was at a crawl, but the flood did not seem to be rising. 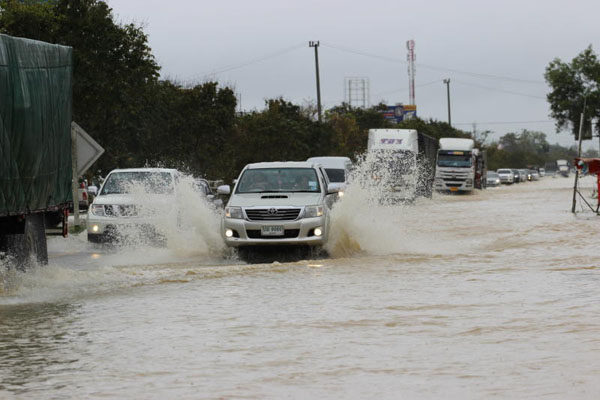 Asian Highway No.41 was under 20-40 centimetres of water in Muang district, Chumphon. (Photo by Amnart Thongdee)