Speaking after an inspection of the affected areas, 4th Army chief Lt Gen Piyawat Nakwanich said he had ordered all 22 branches of the Disaster Prevention and Mitigation Centre to quickly provide help to victims.

Udom Petkhut, chief of the 11th Disaster Prevention and Mitigation Centre overseeing Surat Thani, Chumphon, Nakhon Si Thammarat and Phatthalung, said His Majesty expressed concern over the livelihoods of villagers affected by floodwater which has plagued the southern region since last week.

Mr Udom said centre staff will be deployed to hand out the relief bags to flood victims today, adding other equipment necessary for providing assistance for villagers will also be prepared.

The flood situation in the South has continued to worsen after the region was pounded by consecutive days of heavy rains since last week. The downpours also triggered flash floods and landslides in several provinces.

Col Sirichan Ngathong, deputy spokeswoman of the National Council for Peace and Order (NCPO), said Tuesday the NCPO has instructed the 4th Army Region to work with flood-relief agencies in providing help to flood victims. 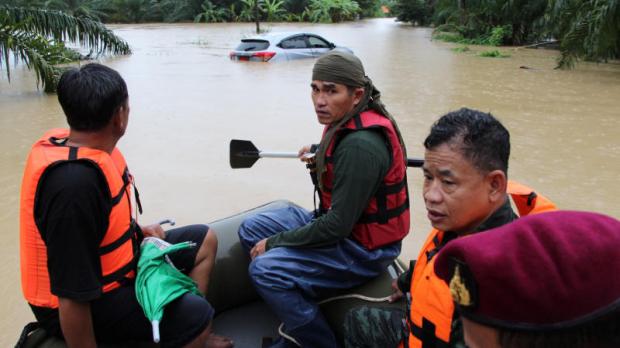 Military forces will be deployed to help evacuate villagers to safe areas, move their belongings to higher ground and build sandbag walls to keep out floodwater. The forces will also help distribute flood-relief bags as well as provide maintenance to local roads and bridges damaged by the floods, Col Sirichan added.

Of the flood-plagued provinces, the situation in three provinces -- Krabi, Yala, Narathiwat -- has eased.

According to the Meteorological Department (TMD), heavy rains are likely to continue in the southern region, causing runoff and flash floods in some provinces.

The stormy weather will also cause waves of two to three metres high in the Gulf of Thailand of the Andaman Sea.

Mr Chatchai said he ordered agencies under his supervision to monitor the weather so they can provide assistance for residents in time, adding staff and necessary equipment were on standby as well.

Five residents have been killed and over 300,000 residents from about 108,000 families affected by floodwater in 23 districts.

A total of 500 flood-relief bags were given away to flood-stricken local residents in the province.

At the city hall, the delegation was also briefed on the flood situation in Nakhon Si Thammarat and other neighbouring provinces including Surat Thani, Songkhla, Phatthalung and Trang by their governors.

Basic necessities will be distributed while security measures will also be beefed up to provide safety for villagers and prevent possible crimes caused by ill-intentioned people who try to exploit the situation to their advantage.

The Highway Police Division also warned travellers planning to visit the southern region to check weather forecasts and proper routes for the sake of their safety.