The national telecom regulator has ordered Wat Phra Dhammakaya's satellite TV station off the air for 15 days following a request by the Department of Special Investigation (DSI), which plans to raid the temple to arrest embattled former abbot Phra Dhammajayo.

The move could indicate that an operation to arrest the abbot is about to kick off.

The decision was made at a meeting of a broadcasting committee of the National Broadcasting and Telecommunications Commission (NBTC) Wednesday. 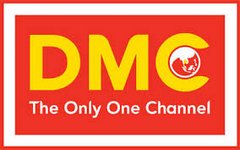 Despite the order, the station was still offering full-service broadcasts on its internet servers. The NBTC attempt to censor and DMC TV's standard cable and satellite formats could focus even more attention on the internet broadcasts.

According to the request letter signed by DSI director-general Paisit Wongmuang on Tuesday and sent to the NBTC, the ban on the temple's satellite TV broadcast is to prevent the temple from using the TV channel to mobilise its supporters to block the authorities operation to raid the temple.

DSI said the agency is in the process of laying out plans to search Wat Phra Dhammakaya in a bid to arrest Phra Dhammajayo.

In the first attempt to arrest Phra Dhammajayo at the temple on June 16, it was found that the DMC channel had persuaded the followers of the temple and the then abbot to gather for religious activities, though its real purpose was to prevent officials from arresting the suspect, the letter says. If the TV channel is allowed to incite people to violate laws, there could be a risk of clashes between people and law enforcement officials, which could lead to violence and endanger national security, it says.

According to the letter, the DSI requested the NBTC to temporarily suspend the DMC broadcasts while the DSI is formulating plans to search and arrest the suspect.

"The police will be very careful to raid the temple in order to prevent a clash with the temple's devotees, but the abbot must be arrested," Gen Prayut said.

This case is no different to other cases in which offenders must face punishment, he added.

"All are subject to the same law," he stressed.

Gen Prayut has urged the former abbot to turn himself in if the monk believes himself innocent.

"If the monk thinks he is innocent, he should come forward and explain himself to the authorities," the premier said. 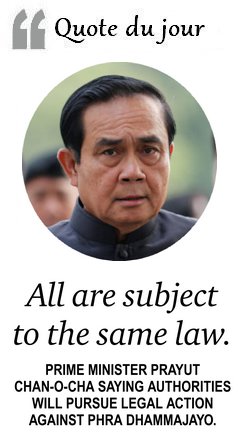 The case was investigated by the DSI.

The deadline for the former abbot to report to the DSI expired at the end of last month.

In a fresh accusation, the DSI revealed earlier that its investigation found the money allegedly siphoned from KCUC to the temple, its monks and related individuals were used to buy shares of some listed companies which have close relationships with the temple.

The amount could be worth more than one billion baht.

It also urged the DSI to show evidence backing up its claims.

The temple insisted that DMC TV played no role in inciting unrest or disturbances as claimed by the DSI.

It also plans to petition against the channel being taken off air, saying the DSI's move infringes on the public's right to access news and information.

Phra Dhammajayo is also facing charges in connection with alleged forest encroachment in Nakhon Ratchasima and Loei. These two cases are being investigated by the police.

Meanwhile, Pol Lt Col Wichien Muangsuwan, chief investigator at Klong Luang police station in Pathum Thani sought a warrant Wednesday for the arrest of Phra Thammasuthi Suthammo, the temple's acting abbot, on charges of providing shelter to Phra Dhammajayo, but the court instructed investigators to send a summons to him first.

According to the summons, which has been sent to the temple, the acting abbot must report to police by Tuesday.