Inmates stand at attention during a drill at the Uthai Thani prison on Sept 6 this year. (Bangkok Post file photo)

Around 100,000 prisoners are qualified for a royal pardon announced on Sunday, with 30,000 likely to be released.

Of the inmates to be released, the first group will likely be out over the next three days. The other 70,000 will see their sentences reduced. 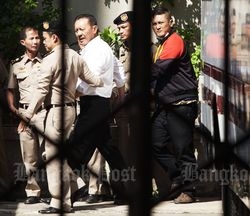 Chuvit Kamolvisit (in white shirt), a former political party leader and entertainment tycoon, is escorted by officials to a prison on Jan 29, 2016 after the Supreme Court sentenced him to two years in jail in the beer bar demolition case. (Bangkok Post file photo)

Among the high-profile inmates to walk free is Chuvit Kamolvisit, a former political party leader and entertainment tycoon who was convicted in January this year and serving a two-year jail term, according to Corrections Department chief Kobkiat Kasiwat.

This is the second time Chuvit was qualified for the royal pardon, he said.

According to official records, the previous royal pardon happened on Aug 8 this year to celebrate the 70th anniversary of King Bhumibol Adulyadej's accession to the throne and Queen Sirikit's 84th birthday.

His Majesty King Maha Vajiralongkorn Bodindradebayavarangkun issued a royal decree on Sunday granting a pardon to minor offenders and those with health problems to mark his accession to the throne. The decree was published in the Royal Gazette and took effect on the same day.

Mr Kobkiat said on Saturday a panel had been set up at each prison to check the qualifications of prisoners.

"Those qualified are first-grade prisoners or higher. Repeat offenders, rapists, public fraudsters or drug traffickers are not qualified."

He added lese majeste prisoners were eligible under the decree.

On measures prepared for the freed inmates, Mr Kobkait said a multi-agency unit would be set up in each area to monitor them and ensure they would not break the law again.

Teerapol Khunmuang, director general of the Skill Development Department, said on Sunday his department would be the core agency to train the freed people for the job market.

"We'll also educate them about the labour law, welfare, social security and access to jobs," he said.

The skills training will begin nationwide on Dec 19. At least one course for 20 people will be held in each province, he added.

"The skills to be trained are mainly those in demand such as tile-laying, welding and lattice window making."

Under the decree, eligible inmates are those sentenced to no more than three months in jail for minor offences, prisoners who do community or public service instead of paying fines, and prisoners released on parole, as well as the disabled and blind, those suffering from cancer, leprosy, HIV, chronic kidney failure, mental disorders, and first-time prisoners who are not 20 years of age on the day the decree comes into effect.

Prisoners on death row also see their penalties commuted to life imprisonment while those serving life term will see their sentences commuted to 50 years and then eligible to normal penalty reduction.