Two schoolboys, Khamnon Kaengwichit, 9, and his cousin Nawapon Sopasaereesuk, 9, both Prathom 1 students at Ban Khun Huay Mae Thor School in Tak's Mae Ramat district, with the money they found in the donated jeans, also on the table. (Photo by Assawin Pinitwong)

TAK - Two schoolboys in Mae Ramat district were delighted to receive donated clothes to wear during the cold season, but what surprised them most was what they found in the pocket of a pair of jeans - 100,000 baht cash.

And now they want to return it.

Local officials have praised the two boys for their honesty and presented them good-deed certificates, bags of new clothing and a cash reward.

Khamnon Kaengwichit and his cousin Nawapon Sopasereesuk are both aged 9 and in Prathom 1 (Grade 1) at Ban Khun Huay Mae Thor School in tambon Sam Muen.

They told their teacher on Thursday afternoon about the B100,000 windfall they found in a pocket of the donated denim trousers, clothing the school distributed to needy students.

The boys and their family wanted to return the money to the owner, they said.

The school had received sacks of used clothes last week from a group of people who donated them for distribution to those in need.

The school was coordinating with the donor group to help find the owner of the cash.

The district chief gave them two bags of new clothes, blankets and other essential items.

Jiraporn Khamput, director of the highland residents promotion centre, gave a cash reward of 5,000 baht to the boys for their honesty.

Sawat Chan-iew, director of Ban Khun Mae Thor School, said he was still trying to contact the donors who contributed the jeans and other clothing to the school. He would try to ensure the money was returned to the owner. 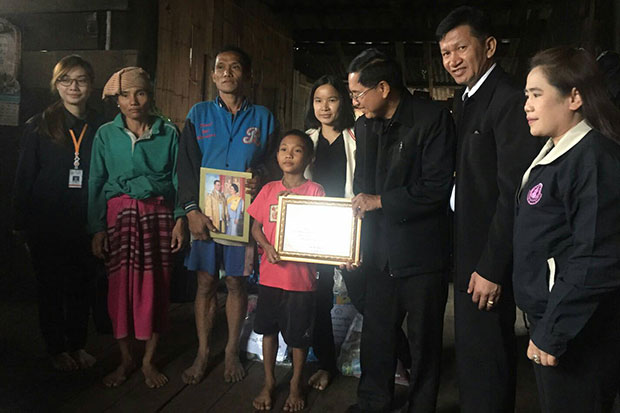 Nawapon Sopaseereesuk, 9, is flanked by officials who visited his home in Mae Ramat district, Tak on Friday to give him and his cousin clothing and other essential items and praise the two boys for their honesty in reporting the discovery of 100,000 baht cash tfound in a pocket of a pair of used  jeans donated to their school. (Photo by Assawin Pinitwong) 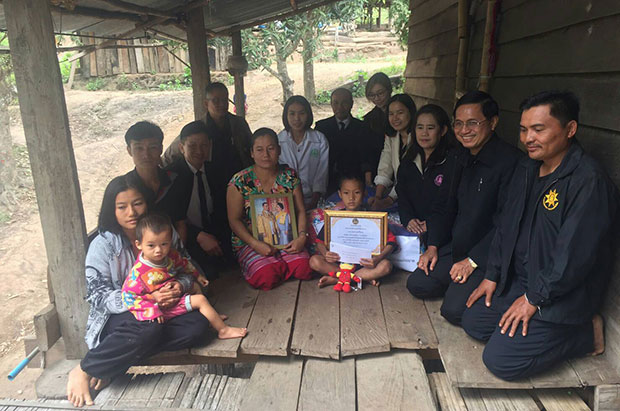 Khamnon Kaengwichit, 9, holding a certificate for his good deeds, is praised for his honesty following the discovery of cash in a pocket of the donated trouser. (Photo by Assawin Pinitwong)