A tourist rides a zipline at the Flying Squirrels adventure site in Chiang Mai on Sept 22, 2015. (Photo by Karnjana Ayuwatanachai)

CHIANG MAI: Three Israeli tourists, including a seven-year-old boy, were injured after they collided and fell from a zipline ride in Mae On district on Friday.

Authorities on Saturday ordered the suspension of the ride operated by Flight of the Gibbon Co in Mae Kampong village in tambon Hua Kaew following the incident.

The two adults and a boy were gliding along the zipline when they rammed into the back of one another, said Mae On district chief Pattraporn Laijud. The impact caused them to fall to the ground and they were rushed to Chiang Mai Ram Hospital.

The injured were identified as Ms Orit Rov, 40,  Mr Sahar Meir, 42, and Liam Boborow, 7. All were Israeli nationals visiting the adventure park with their families.

The two adults are being treated at the hospital, with Ms Orit in intensive care.The boy was treated for shoulder injuries and discharged.

Pol Maj Gen Pitthaya Sirirak, acting deputy chief of Provincial Police Region 5, led an investigation at the scene on Saturday, after which the ride was ordered closed.

Founded in 2007, Flight of the Gibbon bills itself as having "the longest, highest and fastest ziplines in the world". It operates facilities in Chiang Mai, Chon Buri, Koh Phangan in Surat Thani, and in Siem Reap, Cambodia.

A Chinese tourist  fell to her death on Oct 11 last year from a zipline at Flying Squirrels, another tourist venue in Mae Rim district of Chiang Mai. That incident prompted a nationwide investigation of safety procedures at adventure parks. 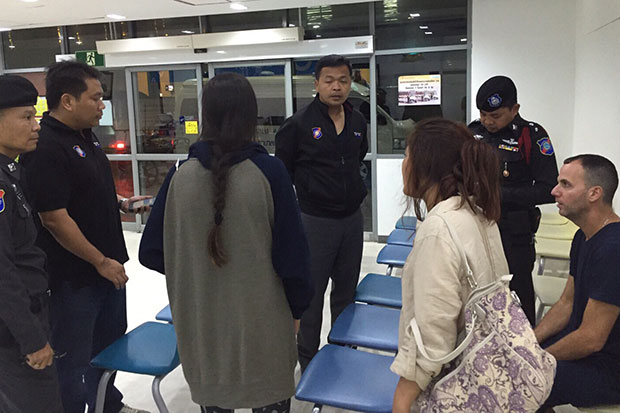 Witnesses to the zipline accident talk with police at the hospital where they were visiting the injured Israeli tourists on Saturday. (Photo by Cheewin Sattha)