Driver Ekapot Yotsiri, after his arrest in Ekamai area following his rampage through traffic at the wheel of a truck, hitting 30 cars and 6 motorcycles. (Photo by Patipat Janthong)

The driver of a six-wheel truck that careened wildly through Bangkok's Ekamai area on Wednesday afternoon, hitting 36 vehicles, was high on crystal methamphetamine, or ya ice, police allege.

The rampage terrified other road users and pedestrians.

Metropolitan Police chief Sanit Mahathavorn told a media conference that Ekapot Yotsiri, 27, was found with 1.93 grammes of crystal meth in his possession. He admitted he had taken the drug three days ago to relieve stress after his wife walked out on him.

Before the wild ride he had driven the truck, owned by Chaipiwat Co, to deliver construction materials to a customer in Saphan Khwai area and was on the way back to his office in the Samyan area. He was driving in the wrong lane, which was also the bus lane, so a police officer stopped him.

Mr Ekapot said he realised that he did not have any money on him, so he quickly drove off, and that is when his troubles really began.

Pol Lt Gen Sanit said Mr Ekapot had previously been arrested for drugs on four occasions. Police did not believe the last time he used the drug was three days ago. His urine test on Wednesday came out “purple”, which meant he had a lot of the drug in his body.

Mr Ekapot will be charged with drug possession, careless driving and fleeing the scene of an accident.

Pol Lt Gen Sanit said the first accident occurred when the truck hit a police motorcycle. Police then tried repeatedly to stop the truck. Finally they shot out its tyres on Ekamai Road and the truck came to a stop near the end of Ekamai Road.

Mr Ekapot got down from the truck cab and ran toward BTS Ekamai station. About 20 passersby helped police stop and arrest him.

Mr Ekapot said he had taken the drug off and on for the past three years, usually when he was driving, but had never had an accident. He said he did not know what he had done.

Pol Sen Sgt Maj Chamnarn Boonvitayakul of Phaya Thai traffic police was the rider of the police motorcycle first hit by the truck as it fled. Mr Ekapot then continued on, hitting 30 cars and six motorcycles in total.

"If he could not go forward, he went backwards, without considering that his action would cause damage to others," said Pol Sen Sgt Maj Chamnarn.

One of the victims, Sompetch Jiamanaeethaveesin posted the video (below) his Facebook page, Sompetch. He said he left his office at 1pm to drive to Thon Buri when he "countered" the truck, being driven as though the driver were on drugs. 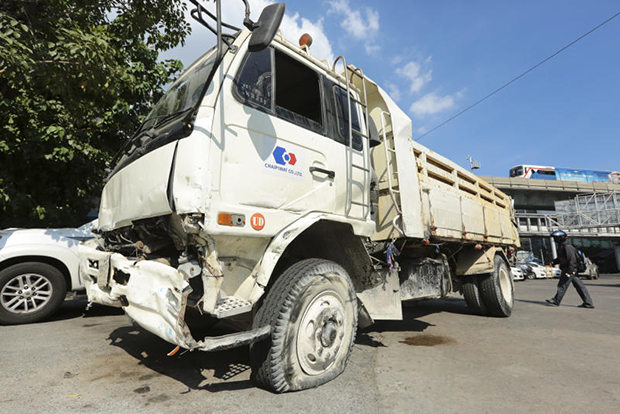 The white truck after it was stopped by police, its tyres shot out. (Photo by Patipat Janthong) 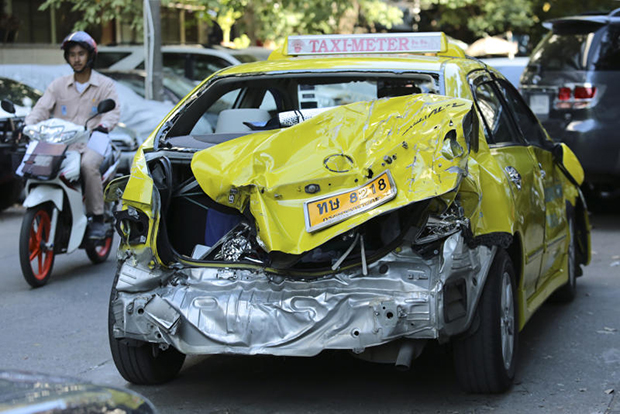 A victim of the rampaging truck. (Photo by Patipat Janthong)