9 held for attack on government sites

A 19-year-old man arrested in connection with a series of cyber attacks in protest of the controversial computer crime law has been charged while several others have been detained for questioning.

The arrest of the young suspect identified as Natdanai Khongdee was announced yesterday at a police press conference where Deputy Prime Minister Prawit Wongsuwon told reporters nine people, including Mr Natdanai, were detained for their alleged involvement in the hacking of government websites.

After the amended Computer Crimes Act was approved by the National Legislative Assembly (NLA) on Dec 16, opponents expressed concern it would lead to more extensive online monitoring by the state.

Hard-line critics who believe the amended law would pave the way for a single internet gateway reacted by urging their supporters to launch a wave of cyber attacks last week. However, the government claimed the websites were down temporarily and the attacks caused minimal disruption.

Gen Prawit, also the defence minister, said yesterday authorities were not turning a blind eye to the threat of cyber attacks and more arrests can be expected.

Speaking at the press conference, national police chief Chakthip Chaijinda said the suspect was part of the group that allegedly attacked the website of the Royal Thai Police. However, they did not obtain any classified information.

Mr Natdanai was detained by the military and handed over to the Technology Crime Suppression Division, he said. He did not share details regarding the time and place of the arrest. 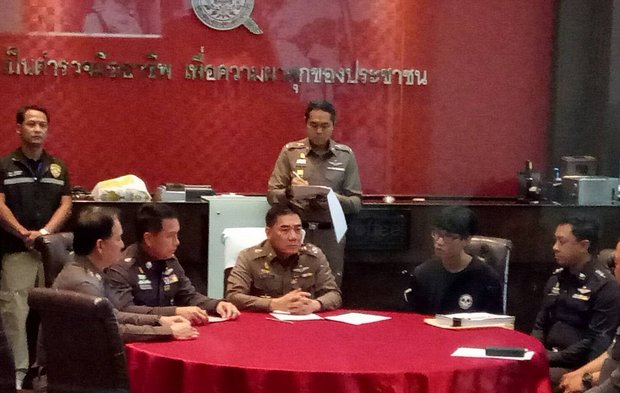 Police and the army charge that Natdanai Khongdee, 19, is involved in the recent website vandalism over "OpSingleGateway". He was presented at a press conference on Monday by national police chief Chakthip Chaijinda (seated, centre) and other top security officials. (Photo JS100)

The young suspect was allegedly in possession of two pistols, a rifle, two gun frames, ammunition, three compressed bars of marijuana and computer sets and accessories when apprehended.

He has also been accused of online gun-dealing.

"The group became active on Dec 17 and every agency concerned was told to join the investigation. The suspect was detained three days later by the military before he was handed over to police," he said.

Pol Gen Chakthip said Mr Natdanai was knowledgeable about technology since he had dropped out of a technical college in Bangkok's Khlong Sam Wa district.

The suspect was among those influenced by internet-based opponents of the single gateway idea, said the police chief.

He declined to comment on whether the group had political affiliations or how many others were involved, but he noted most of the people influenced by the group were 17-20 years old.

He insisted Mr Natdanai's arrest was not made in order to scare off the others, saying the group had two levels among its members -- commanding and operating -- and those at the commanding level were living both inside and outside the country. He said the court would decide if the suspect would be temporarily released on bail.

Po Gen Dejnarong Suthicharnbancha, acting deputy police chief, said the police have charged Mr Natdanai for violation of the Computer Crimes Act, illegal possession of guns, illicit drug possession and criminal association. If found guilty he could be jailed for up to 10 years.

However, the Civilians Against Single Gateway Group said on Facebook yesterday Mr Natdanai was not one of their hackers and he seemed to be a scapegoat of the authorities. It said the operation to attack the state website would continue.

Pol Maj Gen Siripong Timula, chief of the information technology support division attached to the Office of Information and Communication Technology, said the Facebook page of the Civilians Against Single Gateway Group, "Thailand Internet Firewall #opsinglegateway", is not just a Facebook page, but was used for their operations.

He said the operating level had several sub-groups with different hashtags and police were investigating them. He added Mr Natdanai's attack on the police website did not do any harm.

Pol Maj Gen Supachet Chokechai, commander of the Technology Crime Suppression Division, said the suspect told police he believed the cyber law was related to a single gateway. A source close to the investigation said yesterday there were more than 10 people at the operating level who have technical knowledge to launch cyber attacks.

Meanwhile, the Ministry of Tourism and Sports yesterday lodged a complaint with police against the Anonymous group for disrupting the ministry's website which crashed at 9.30pm last Friday.