A large number of police and officials from the Department of Special Investigation (DSI) surrounded Wat Phra Dhammakaya Tuesday morning to try to enter the temple.

The force arrived at the Pathum Thani temple site about 3am Tuesday, and was stationed at entrance Gates 1, 4, 5 and 6. The DSI officers at Gate 4 sent up a drone to send back video of the situation inside the temple.

The drone flight was cancelled after 10 minutes, when someone inside allegedly tried to cripple it or bring it down with a portable laser.

Around 6am, electricity was shut off at Gate 4,without explanation.

At 7am, some officers were withdrawn from Gate 4.

At Gate 6, disciples wearing raincoats and masks on their faces put long tables across the entrance, apparently to try to bar entry. Monks and disciples sat down at the gate to pray.

Around 7.30am, security officers at Gates 5 and 6 tried to open negotiations with the disciples inside. They asked the temple followers to remove items from the entrance area, "within one or two hours".

Authorities had to deploy many officers to the temple, which had a vast area covering more than 2,000 rai to arrest Phra Dhammajayo, the former abbot of the temple. The presence of a crowd of temple followers who were praying at the gate in front of the temple posed an obstacle for the officers to enter the temple.

The embattled monk is still receiving medical treatment for an illness inside the temple, according to the temple's communications office.

Earlier, police obtained four warrants approved by the court to search the temple and detain the 72-year-old senior monk, but no action was taken and the warrants expired.

Phra Dhammajayo, now the honorary abbot, was indicted for money-laundering charges in connection with the multi-billion-baht Klongchan Credit Union Cooperative (KCUC) embezzlement scandal. The case was investigated by the Department of Special Investigation (DSI).

The monk is also the subject of arrest warrants issued by the Sikhiu and Loei provincial courts in connection with alleged forest encroachment in Sikhiu district of Nakhon Ratchasima province and in Loei province.

Below: Police outside Wat Phra Dhammakaya on Tuesday morning. 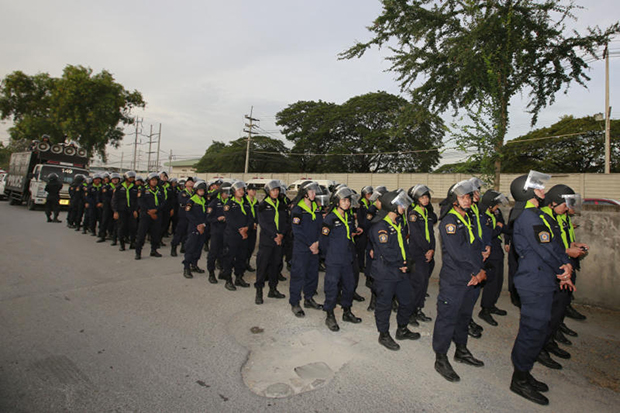 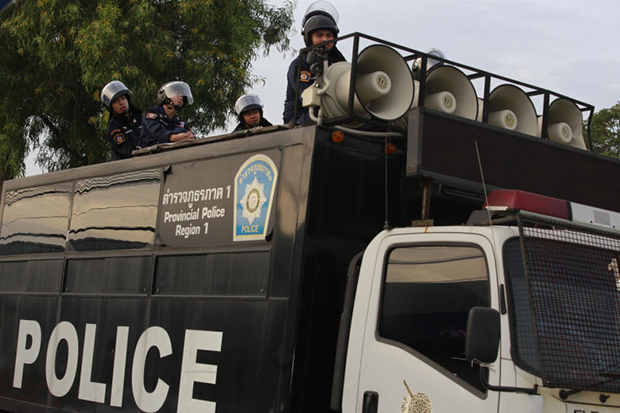 Prime Minister Prayut Chan-o-cha on Wednesday reiterated that martial law will not be invoked to quell the anti-government protests.